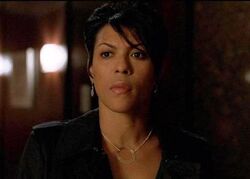 Dr. Erika Stevenson was a co-worker of Jack's at St. Sebastian Hospital after his return from the Island, and a member of the St. Sebastian Neurosurgery Group. Late one night, he asked her to write him a prescription for clonazepam (an anticonvulsant and anxiolytic drug prescribed for anxiety disorders) and she did so, but advised he seek psychiatric help for his problems. ("Something Nice Back Home")

Retrieved from "https://lostpedia.fandom.com/wiki/Erika_Stevenson?oldid=1095691"
Community content is available under CC BY-NC-ND unless otherwise noted.