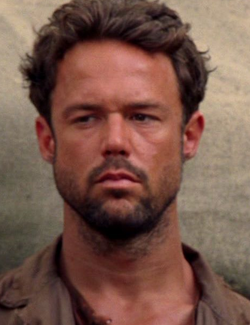 Erik was an Other that confronted Sawyer, Kate, and an injured young Ben in the jungle in 1977. He agreed to bring them to Richard. He also expressed a concern about healing Ben, saying that they should check with Ellie and Charles. ("Whatever Happened, Happened")

Ellie decided to bring him on Jack's mission to retrieve the Jughead. While trekking to the bomb's location, Erik was shot and killed by Sayid when he attempted to stop Kate from leaving. ("Follow the Leader")

Retrieved from "https://lostpedia.fandom.com/wiki/Erik?oldid=1113669"
Community content is available under CC BY-NC-ND unless otherwise noted.