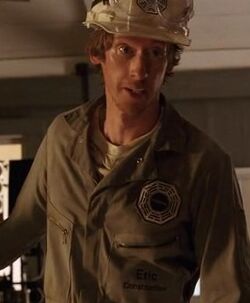 Eric first appeared on the day that the new recruits came to The Island. He was the Barracks settling a bicycle in the background while Juliet discusssed babies with Amy. Later that day, he was seen in the Processing Center, standing at the entrance right behind Kate. Later he was seen sitting at the table assisting a new recruit. ("Namaste")

The next day, Eric was seen having breakfast at the cafeteria. He lined up behind Casey, and got his food from Floyd. ("He's Our You")

A couple of days later, he was seen wearing an Orchid construction helmet, and interrupted the filming of the Arrow Orientation film to tell Dr. Chang about a problem at the construction site for the Orchid. He transported Dr. Chang in a DHARMA van to the still under construction Orchid greenhouse, then escorted Dr. Chang underground to a superior of his and returned to work. ("Because You Left")  ("The Variable")

Before the 1977 Barracks battle, Eric was seen walking in front of Jack and Sayid, staring at them. It's possible that he survived the battle and escorted off the island prior to 1977 or he may have been killed in the Purge. ("The Incident, Part 1")

Retrieved from "https://lostpedia.fandom.com/wiki/Eric_(DHARMA_Initiative)?oldid=1112469"
Community content is available under CC BY-NC-ND unless otherwise noted.