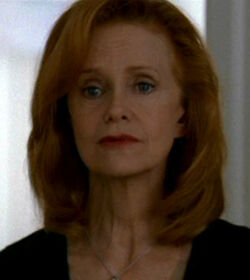 Emily Annabeth Locke is the biological mother of John Locke.

On May 30th 1956, at the age of fifteen, Emily was hit by a car on her way to visit the man she was dating, whom her mother disapproved of because he was twice her age. While rushing to the ER, she told a nurse that she was six months pregnant. She soon gave birth to her baby, whom she adamantly named John. Because he was born so prematurely, the infant had to be kept in isolation for the sake of his health.

After he miraculously regained his health, the nurse allowed Emily to hold John for the first time. Emily exclaimed, "I can't do this!" and ran out of the room. As Emily's mother asked the nurse about the possibility of adoption, the nurse noticed a mysterious man looking through the window. She asked Mrs. Locke who he was, but Mrs. Locke said she didn't know. ("Cabin Fever")

Later in life, Emily was admitted several times to the Santa Rosa Mental Health Institute for a treatable type of schizophrenia. She became addicted to drugs; however, it is unknown if the addiction was related to her treatment. ("Deus Ex Machina")

About ten years prior to the crash of Flight 815, Anthony Cooper used Emily as part of a con to get John to donate his kidney to him, after his own kidney had failed.

During the ploy, she told her son that he was very special, and that he had no father because he was "immaculately conceived." After Cooper had successfully stolen John's kidney, Emily later revealed Cooper's betrayal, apologizing and telling Locke that she participated in the con for money. ("Deus Ex Machina")

Teenage Emily was portrayed by Holland Roden in "Cabin Fever". The casting call referred to the part as Teenage girl. Plays as 16, Caucasian, red hair (or willing to dye hair red). Emotional, prone to dramatic gestures, passionately in love, and fights with her Mom about it. Nice Co-star. [1]

From the SRMI admissions forms shown in "Deus Ex Machina", the following facts are revealed about Emily Locke:

Retrieved from "https://lostpedia.fandom.com/wiki/Emily_Locke?oldid=1098147"
Community content is available under CC BY-NC-ND unless otherwise noted.