Lostpedia
Register
Don't have an account?
Sign In
Advertisement
in: Cast, Via Domus voices, Season 6 Cast,
and 3 more
English 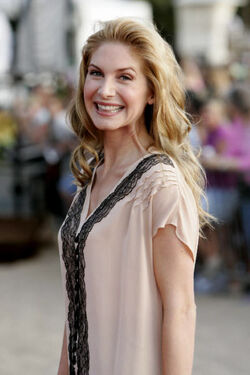 Shortly after her birth, her family moved to Dallas, Texas, where she graduated from Booker T. Washington High School for the Performing and Visual Arts. In 1991, she graduated from Stephens College where she earned her BFA degree in acting. She also worked for six years at the Dallas Theater Center and a year at the Encore Theater. Her theatrical stage credits include productions of As You Like It, A Funny Thing Happened on the Way to the Forum, Measure for Measure, Baby, and Chicago.

Prior to her role on Lost, Elizabeth was featured in many films, her most notable roles include Linda in Gia, Mrs. Sullivan in Frequency, Edele in Running Scared, and Carol Newman Calvin in The Santa Clause 2 and its sequel, The Santa Clause 3: The Escape Clause.