"The Man from Tallahassee"

Locke, after The Swan imploded

Eko's stick was a walking staff made and carried by Mr. Eko; it was nicknamed the "Jesus stick" by Charlie, and called a prayer stick by Locke. Eko made his staff from a branch he broke off on the beach, carving into it various Bible scriptures (book, chapter, and sometimes verse), a small cross, and the Numbers. When asked by Claire what he was carving, Eko answered, "Things I need to remember."

After Locke and Desmond locked Eko out of the Swan, Desmond picked up Eko's stick and questioned Locke on the significance of it, to which Locke replied that Eko carried it because he was a priest. ("Live Together, Die Alone, Part 2")

Following the implosion of the Swan, Eko's stick fell out of a tree, almost hitting Locke, who was regaining consciousness when it fell. ("Further Instructions")

After Eko's death, Locke retrieved the stick. Locke intended to use the stick as a marker for Eko's grave. As he was pounding the stick into the ground, he noticed an inscription: "Lift up your eyes and look north John 3:05". ("I Do") Locke interpreted "305" as a northward compass bearing, which led John, Kate, and Sayid to the Flame station. ("Enter 77")

Eko's stick was last seen at The Barracks in the backpack Locke demanded that Alex get. ("The Man from Tallahassee")

In the culture of the Israelites, the shepherd's crook or rod would be a natural symbol of authority, as the tool used by the shepherd to correct and guide his flock (Psalm 23:4).

Psalm 23: Highly significant, often quoted passage in Christianity. Makes explicit mention of God's rod and staff (Psalm 23:4- "...Your Rod and Staff, they comfort me." Also, a possible allusion to The Monster (Psalm 23:4- "Even though I walk through the valley of the Shadow of death..."). The Psalmist says they will not be afraid for God is with them (Psalm 23:4- "...I will fear no evil for you are with me...") which is paralleled in Eko's confrontation with The Monster

Acts 4:12: "Salvation is found in no one else, for there is no other name under heaven given to men by which we must be saved" The book of Acts was written as the second volume of the Gospel of Luke. This passage is a refutation of all religions, and the proclamation that only Christ can provide salvation. The speaker of this passage is Peter who, along with John, has just spent the night in prison for preaching.

Colossians: Written by the apostle Paul. The epistle has today been divided into 4 chapters. The main themes throughout the Epistle are reconciliation with Christ and rules for Christian living. Life and Death imagery is found in Col 2:13 - "When you were dead in your sins... God made you alive with Christ...". There is also explicit reference to the show's theme of Parent issues in Col 3:21 - "Fathers, do not embitter your children, or they will become discouraged"

Hab 1:3: From the book of Habakkuk, the 8th of the 12 minor prophets. This book is essentially a dialogue between Habakkuk and YHWH, The LORD. In this sense Habakkuk is unique amongst the minor Prophets for challenging God. In Hab 1:3 he is essentially demanding an answer for the Problem of Evil ([1]). Habakkuk asks God "Why do you make me look at injustice?, Why do you tolerate wrong?.." and "Destruction and violence are before me; there is strife, and conflict abounds." God answers that in solution, He is going to raise up the Babylonians presumably for war.

Lift Up Your Eyes and Look North (Genesis 13:14): Interestingly this is only a partial quote that misrepresents the Scripture and gives a new meaning to the text. This adaption of the text strongly lends itself to the theory that Mr Eko is writing specifically to John Locke. The original scripture reads "The LORD said to Abram after Lot had parted from him, "Lift up your eyes from where you are and look north and south, east and west". The omission of the other directions clearly serves the purpose of directing John Locke somewhere. The scripture itself is the beginning of YHWH's covenant with Abram (whose name is later changed to Abraham. YHWH asks Abram, who is in Canaan, at the time to look around in all directions; he says that the land will belong to Abram, and that Abram's decendents will be as numerous as the dust (from which Adam and Eve were created) upon the earth. This is a particularly significant passage as it refers to the Covenant God, the Covenant Land and the Covenant people (which is the beginning of the Jewish (and thus; Christian) faith)). Abraham is father of Isaac, who is father of Jacob. The three are generally held to be the great patriarchs of the religion; "The God of Abraham, Isaac and Jacob" (Exodus 3:16 et al.)

John 3:05 Firstly it important to note the non-standardized referencing used here. This should have been written 'John 3:5' the fact that Mr Eko has chosen to do otherwise is revealed to be significant. Perhaps this is meant to symbolize a revelation, or a vision from Mr Eko. Nevertheless John 3:5 reads "Jesus answered, "I tell you the truth, no one can enter the kingdom of God unless he is born of water and the Spirit." this is Jesus' reply to Nicodemus, one of the Pharisees who is questioning Jesus on the idea of re-birth. This significant piece of scripture allows for Adult Baptism (Claire in Fire + Water) and insists that Baptism must be by the Holy Spirit, not just water. The Gospel of John was written for a Gentile (Non-Jewish) audience.

Luke One of the main themes in Luke is the re-orientation of Salvation from the future to the present. That is to say that one does not need to wait in order to claim spiritual gifts or healing; it is available now. Luke focuses on the idea of Jesus (and thus, Salvation) for everyone. Perhaps significant is the fact that Luke is sometimes called, or believed to be (because of his writing style) "the Doctor" (Col 4:14) Medical personnel

Psalm 14 Is about how those who are corrupt fear the righteous for God is on the side of the Righteous (Ps. 14:5). The Psalm is essentially about the corrupt nature of the world and also of Israel, it looks forward to salvation (rescue). Psalm 14 also includes a reference to Jacob; Ps. 14:7 - "When the LORD restores the fortunes of his people, let Jacob rejoice and Israel be glad!"

Rev 5:3 Revelation is part of a genre known as apocalypticism. It is rich with symbolism and metaphors and is otherwise known as "The Apocalypse of John" and deals with the Apocalypse and the coming of the Kingdom of God. The scripture Rev 5:3 reads "But no one in heaven or on earth or under the earth could open the scroll or even look inside it." It is contained in a narrative of the author's religious visions. The scroll referred to cannot be opened by anyone apart from The Lamb (Jesus) who alone is worthy to do so. When Jesus reads the scroll it is found to contain a list of the redeemed, 144,000 in all. 12,000 from each of the 12 tribes of Israel including the tribe of Benjamin. This may be an allusion to the shows theme of Lists.

Rom 6:12 This book was written as indicated by its title to the Church in Rome. The particular verse referenced reads "Therefore do not let sin reign in your mortal body so that you obey its evil desires" and is part of Paul's invocation to become dead to sin and alive in Christ (Life and Death). Essentially Paul urges one to offer themselves to God and assures them of their salvation through Jesus' death.

Titus 3 Titus was one of Paul's dearest partners in faith, and this is a letter from Paul to Titus. Since Mr. Eko used to be a criminal and now considers himself a priest, this may be significant. Titus 3 in particular is concerned with the previously sinful nature of the clergy before they came to know Christ, and were "Justified by grace" (Titus 3:7) and emphasizes the Mercy of Jesus. 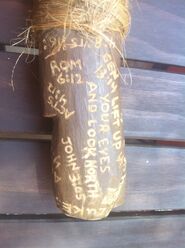 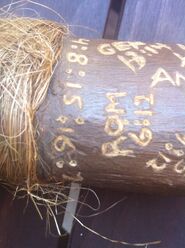 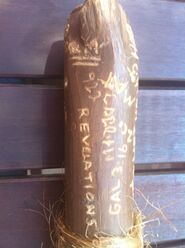 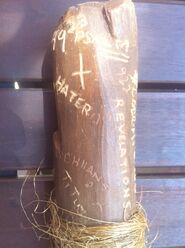 For fan theories about these unanswered questions, see: Eko's stick/Theories