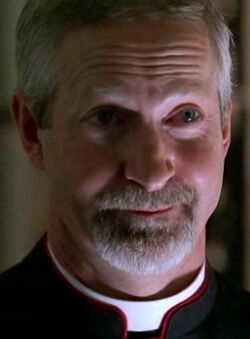 Eko's monsignor, whose name is unknown, is a high ranking clergy within an Australian Catholic Church and was responsible for Mr. Eko. The Monsignor called Eko "Father Tunde", and thought that he was legitimately serving as a priest. The Monsignor assigned Eko to investigate the Charlotte Malkin resurrection. Eko told the Monsignor he wasn't the right person for the job because he didn't believe the Malkins' story. The Monsignor replied that he chose Eko exactly because of his skepticism and sent him along his way.

Retrieved from "https://lostpedia.fandom.com/wiki/Eko%27s_monsignor?oldid=1082099"
Community content is available under CC BY-NC-ND unless otherwise noted.