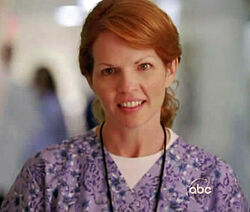 An ER nurse took care of Penny and young Charlie at the hospital after Desmond was shot by Ben. She came to Penelope after Desmond's operation was successful and informed her that he was in the recovery room, doing fine. ("The Variable")

Retrieved from "https://lostpedia.fandom.com/wiki/ER_nurse_(The_Variable)?oldid=1116222"
Community content is available under CC BY-NC-ND unless otherwise noted.