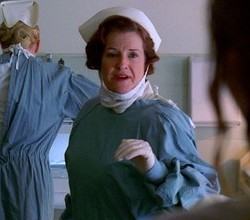 Later, she told Emily and Mrs. Locke about all the complications the baby had overcome, saying he was the youngest premature baby to ever survive at the hospital. She offered to let Emily hold the baby, but Emily became upset and ran out of the room crying. Mrs. Locke then unemotionally asked who she should speak to about adoption. Before giving an answer, the ER nurse saw Richard Alpert standing behind the viewing window. Mrs. Locke looked disturbed to see him and said she didn't know who he was. ("Cabin Fever")

Retrieved from "https://lostpedia.fandom.com/wiki/ER_nurse_(Cabin_Fever)?oldid=1095293"
Community content is available under CC BY-NC-ND unless otherwise noted.