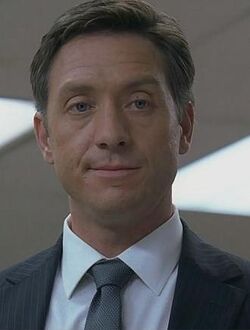 Duncan Forrester is the attorney who represented Kate in her criminal defense trial following her return from the Island. ("Eggtown")

Duncan escorted Kate to a courthouse in Los Angeles. Kate was hesitant about entering and asked if there was a back enterance. Duncan instead told her that she would go in the front door with her head held high. They then both exited the car and made their way through a throng of reporters and protesters, with Duncan refusing to give any comments.

In the courtroom, despite Duncan's best efforts, Kate was put into custody after she pleaded not guilty. Duncan apologized for her being put into custody. He later visited her, telling her that the case would need to be a character case instead of about what Kate did or did not do. Duncan suggested allowing Kate's son into the courtroom to build sympathy for her with the jury, but Kate refused to expose him to the proceedings.

After admitting being damaged in the prosecution's opening statement, Duncan called a clean-shaven Dr. Jack Shephard to the stand as a character witness. Kate seemed visibly shocked. Once sworn in, Jack stated that he knew Kate from the crash of Oceanic Flight 815 and the more than 100-day survival ordeal that followed. Duncan then asked him if he knew of Kate's fugitive status and how. Jack replied that he did know, but he didn't learn from marshal, as, according to Jack's testimony, he died during the plane crash. It was Kate, Jack said, who later told him of her status.

Later, Duncan escorted in Kate's mother, still alive but sickly and wheel-chair bound, to see Kate in a courthouse conference room, then left the two alone to talk.

During a recess, Duncan, Kate, and Melissa Dunbrook, the district attorney, discussed plea bargain sentencing. After rejecting an offer of four years in prison for his client, Duncan also rejected an offer of ten years' probation, but Kate overrided his rejection and said she'd take it. ("Eggtown")

Retrieved from "https://lostpedia.fandom.com/wiki/Duncan_Forrester?oldid=1107498"
Community content is available under CC BY-NC-ND unless otherwise noted.