Head of Retrievers of Truth

Dr. Vincent "Wally" Bolé, a character from the storyline of The Lost Experience alternate reality game, was born 1938 and is an expert in the field of canine parapsychology and neuroveterinary medicine at La Ville Du Chien Jaune Université (literally translates as: "The City of the Yellow Dog University), outside of Troisvierges, Luxembourg.

He currently appears to be the head of the Retrievers of Truth Institute for the Advancement and Research into the Mental Abilities of Yellow Labrador Retrievers.

"His life was a hellish nightmare of neglectful parents, and a near-fatal accident until a kindly yellow lab pranced into his life and change him... forever."

The nickname Wally comes from the family's trusted Labrador Retriever who saved his life when, as a child, he fell into an abandoned well on the family estate. After this incident and because he had less-than attentive parents (his father was a near-famous neurosurgeon, his mother a saucier and the co-host of a little-watched TV show) he came to look to the dog as his surrogate parent.

The bond that developed between them and a chance encounter with The Hanso Foundation CEO and founder, Alvar Hanso, at a life-extension workshop in Rangoon would inspire Dr. Bolé to expand his research and eventually create the Retrievers Of Truth Institute for the Advancement and Research into the Mental Abilities of Yellow Labrador Retrievers.

Dr. Bolé has written several books on the subject of canine telepathy including, "Yellow dog, you know my mind," "Don't say fetch, think fetch," and "They may not speak but they say so much." Sadly, at this time all books are out-of-print. (from retrieversoftruth.com)

"Our best friends are indeed trying to tell us something."

"It's not just that they're trying to talk to us, they're also listening... intently."

"The things that aren't said can be more important than those that are."

As part of his website, Dr Bolé sends out a newsletter every once-in-a-while. For transcripts, see Retrieversoftruth.com Newsletters. 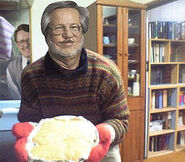 Dr. Bolé with Mandrake Wig in the background.

Dr. Bolé in a store of some kind.