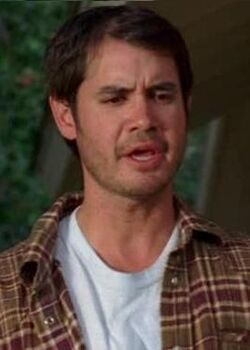 Doug was a middle section survivor of Oceanic Flight 815. A redshirt member of Locke's group, he was killed on Day 97 by the mercenaries.

After many uncredited appearances as an extra character across four seasons, the character was finally officially credited by ABC Medianet in "The Shape of Things to Come", by virtue of a speaking line, in the character's death scene.

After the crash of Oceanic Flight 815, Doug was assisted by another survivor. When the signal party returned to the beach, Doug and the other survivors listened to Sayid's speech. Doug also helped Claire and other survivors sort possessions which were strewn across the beach from the crash, and collected firewood for the mass funeral. ("Pilot, Part 1")  ("Walkabout")

Doug witnessed Jin deliver a beating to Michael when Jin found Michael wearing the Rolex watch. Later that day Jack asked Doug and other survivors if they would like to live at the caves with some other survivors. Soon after, Doug and few other survivors walked to the caves and made camp. When Jack was caught in the cave-in, Doug was then seen trying to help. ("House of the Rising Sun")  ("The Moth")

Doug helped along with his fellow survivors in getting the raft in the water for the first time, after Rousseau arrived at the camp to deliver a dire threat about the coming of the Others. Along with all those around him at the raft, he saw the pillar of smoke coming from across the Island, apparently signaling the approach of the Others. Doug was present for the official launching of the raft and soon after he was seen walking to the caves. ("Exodus, Part 1")  ("Exodus, Part 2")

At the caves, Doug spoke to Craig and listened to Jack's speech. When a pallet of DHARMA food and supplies was found on the Island, Doug was handing it out in the forest. Doug also listened to Bernard's speech about making a SOS sign, however, he opted not to participate in the construction of the sign. ("Dave")  ("S.O.S.")

Doug watched with amusement as Hurley beat Sawyer playing ping-pong, in a game that resulted in Sawyer being unable to refer to anyone by nickname for a week. When Jack, Sayid, and Kate returned to the camp from escaping from the Others, Doug was there to greet them. He and the rest of the survivors were shocked to see Juliet coming to their camp and sleeping in their tents. At night time, when Jack was talking to the survivors about getting rescued, Doug was there to help Claire to her bed tent. ("Enter 77")  ("One of Us")

When the Others decided to raid the camp, Doug joined his fellow survivors in preparing to leave for the radio tower. Doug then walked to the radio tower with the survivors. Upon reaching the tower with everyone else, Doug was overjoyed when Jack finally made communication with Naomi's ship. ("Greatest Hits")  ("Through the Looking Glass, Part 1")

Doug celebrated with the other survivors, while waiting for rescue. Before journeying to the cockpit, Jack gave Doug some firewood. When the group reached the cockpit, they separated into factions and Doug chose to join Locke's group, who were heading to the Barracks. The next day he was seen walking to the Barracks with the rest of Locke's group. While Locke and the group questioned Charlotte, Doug was seen holding Vincent. ("Confirmed Dead")

When the freighter mercenaries invaded the Barracks, Sawyer was armed with a gun and frantically looking for Claire. He came across Doug holding some firewood. Sawyer asked if he had seen Claire leave her house at all, but Doug didn't answer. Confused, he asked why Sawyer was carrying a gun. Suddenly, Doug was shot in the middle of his chest by Redfern and died, with his blood spraying all over Sawyer. His death prompted two other survivors to come out into the open and be shot as well. ("The Shape of Things to Come")

In the flash-sideways timeline Doug was seen safely aboard Oceanic Flight 815. He witnessed Charlie being escorted off the plane. He was briefly glimpsed unloading his luggage after he exited the plane. He was also seen outside the airport waiting for a taxi as Kate fled from Edward Mars. ("LA X, Part 1")

Retrieved from "https://lostpedia.fandom.com/wiki/Doug_(survivor)?oldid=1116091"
Community content is available under CC BY-NC-ND unless otherwise noted.