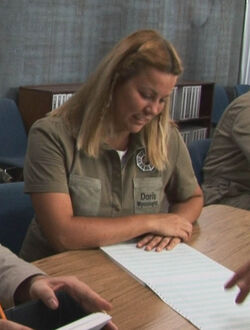 Doris was a DHARMA Initiative Mycologist extra who was seen in "The Man Behind the Curtain" at the registration table. Her badge identifying her can only be seen in the Season 3 DVD extras.

She may have been killed along with other members of the DHARMA Initiative in the Purge, or she may have been evacuated off the island sometime between 1977 and The Purge.

Retrieved from "https://lostpedia.fandom.com/wiki/Doris?oldid=1115955"
Community content is available under CC BY-NC-ND unless otherwise noted.