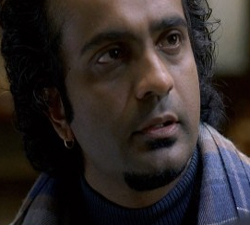 Donovan was a physicist (presumably a professor of physics) in London and a friend of Desmond's.

Donovan was criticizing a student's thesis on the topic of unpredictability one day when Desmond ran in, soaking wet; this apparently proved a point Donovan was making to the student.

Desmond told Donovan of his belief that he'd been transported back in time and tried to predict a football game's outcome to prove his claim. Donovan was skeptical, and the prediction failed - Desmond had been thinking of a different game. Donovan discouraged Desmond's apparent fantasies and urged him to instead concentrate on the true inportant things in his life. As a result, Desmond soon went shopping for an engagement ring for Penny. ("Flashes Before Your Eyes")

Retrieved from "https://lostpedia.fandom.com/wiki/Donovan?oldid=1095803"
Community content is available under CC BY-NC-ND unless otherwise noted.