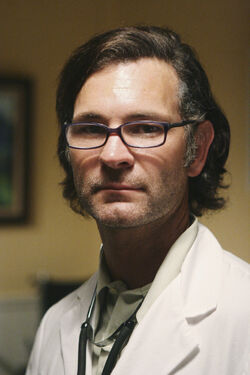 A DHARMA Initiative doctor worked on the Island in the late 1970s.

After Amy went into labor, James LaFleur took her to the doctor. The doctor determined that the baby was upside down in the womb, and became reluctant to do the procedure, because he was only an internist. LaFleur instead went to get Juliet, an obstetrician, to do the procedure. The doctor, unaware of Juliet's medical expertise, objected to her performing the operation, but was overridden by LaFleur and Amy. ("LaFleur")

The doctor was mentioned to be away at the Looking Glass station meaning he was unavailable when a doctor (more specifically a surgeon) was needed to save an injured Ben. ("Whatever Happened, Happened")

Retrieved from "https://lostpedia.fandom.com/wiki/Doctor_(DHARMA_Initiative)?oldid=1106096"
Community content is available under CC BY-NC-ND unless otherwise noted.