Start a Wiki
"Do No Harm" 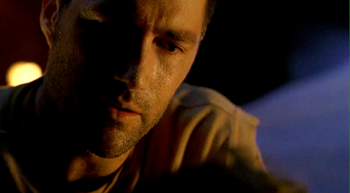 "Do No Harm" is the twentieth episode of Season 1 of Lost. As Boone's condition worsens, Jack struggles to try to save his life. Elsewhere, Claire enters labor, but without Jack, Charlie and Kate, along with Jin, are forced into a role they had not prepared themselves for. Flashbacks in this episode take place around the events of Jack's wedding with Sarah.

Jack is helping his friend, Marc, tie his bow tie in a tuxedo shop. Marc is nervous about having to speak publicly and Jack teases him, saying it's not too late to back out. Marc says 8 beers should get him through any speech, but Jack says she'll catch him. The tuxedo shop owner then brings out another tuxedo for the groom - Jack.

At Jack's wedding rehearsal, Marc finishes up his speech and introduces Jack's bride-to-be, Sarah. Jack was right: Sarah mentions Marc's drinking. She tells the rehearsal party the story of how she met Jack; the car accident, her broken back, Jack's promise to fix her, and his miraculous success. Because of all this, she will dance at her wedding. She finishes her speech by toasting Jack as her hero.

Jack sits playing a piano in a hotel bar. Sarah walks up in her pajamas, notices a couple of girls checking him out, and sits down to play "Heart and Soul" with Jack. Jack hasn't written his vows yet. Sarah tries to take some of the pressure off, but Jack is determined to finish them.

Jack sits on the edge of the hotel pool, soaking his feet, with a half full bottle of alcohol. His father walks up from behind and joins him. Jack is still having trouble writing his vows. He says he may not make a good husband, and he may have only proposed to Sarah in the first place only because he saved her life. His father says, "Commitment is what makes you tick, Jack. The problem is that you're just not good at letting go."

Sarah finishes giving her vows, and the minister turns to Jack. Rather than read a prepared speech, he speaks from the heart. He tells Sarah that she's mistaken about the accident; he didn't fix her, she fixed him. He loves her and always will.

Jack, Sun, and Kate are working furiously to treat Boone's wounds. Sun steps in as a nurse for Jack, who sends Kate to Sawyer's stash for alcohol to sterilize instruments.

Jack rips open Boone's pants to get at his leg wound. Boone is semiconscious and in a great deal of pain. He has lost a lot of blood and is muttering incoherently. Jack promises to fix it and save Boone.

Sawyer, Michael, and Walt are taking a break from raft-building to eat some fish. Jin continues to work furiously. He wants to get off the Island, badly. Kate runs up in a hurry and demands Sawyer's alcohol. Sawyer obliges and offers to come back to help, but Kate thinks there might be too many "cooks" already.

At the caves, Jack is stitching up Boone's chest. Boone is muttering apologies feverishly. He needs a blood transfusion. First, Sun insists Jack step away to regroup. Charlie is outside the operating area, full of questions about Locke and Shannon, but Jack brushes him off impatiently.

Jack returns to Boone to examine the leg again. Sun enters with a small stick. Jack dismisses her herbal remedies, but he misunderstood: the stick is for Boone to bite down on. She holds Boone's shoulders down, and Jack sets the leg with a sickening crack.

Kate is sprinting through the jungle when she trips and falls on a root. Her backpack opens and some of the alcohol bottles are broken. As she's collecting the remaining bottles, she hears moaning just off the path. Claire is going into labor, though she tries to deny it. Kate tries to get Claire on her feet to walk her back to Jack, but Claire is too far along. Kate's not willing to leave her there by herself, so she yells for help. Jin hears from the beach and comes running, but he can't be of much help. Kate says she needs Jin to get Jack at the caves; she hands him the alcohol to deliver while she stays with Claire.

At the caves, Sun asks a deteriorating Boone to tell them his blood type before he goes completely unconscious. At the same time, Jack is trying to improvise some type of a needle, but the bamboo he's working with is just too fragile. Boone finally says he is A-negative. Jack sends Charlie to find out every survivor's blood type as fast as he can, and to bring Shannon.

Shannon and Sayid arrive at a beautiful, secluded beach where Sayid has planned a surprise picnic. ♪

Charlie returns. Out of the entire camp, only 4 people knew their blood type; and Shannon is nowhere to be found. Sun returns with a sea urchin, whose hollow spines are sharp enough to pierce a vein. Jack prepares to give Boone a transfusion of his own blood, which is O-negative. It's not a match, but it might be close enough to save him.

Jin arrives at the operating area, and he informs Jack via Sun's translating that Claire is having the baby. She's okay, but she's in pain. The contractions are about two minutes apart, there's no bleeding, her water hasn't broken yet, but she can't move. Jack tells Jin to go back to Kate and Claire, and sends Charlie along with instructions for Kate to deliver the baby once Claire is ready. Charlie hopes that Jack will be there by then, but Jack is in no position to move anytime soon. He is busy pumping blood into Boone through a tube in his arm.

In the clearing, Kate's tending a fire and Claire is resting between contractions. Thinking they might be over, Claire tries to stand and leave, but her water breaks. Claire begins to panic and continues to deny she might be having the baby, but Kate reassures her Jack's on his way.

Boone wakes up during the transfusion and tries to tell Jack about the plane. He mutters about how Locke told him not to tell about the hatch. Jack tries to get more information out of him, but Boone slips back into unconsciousness. ♪

At the picnic beach, Shannon stops kissing Sayid to explain her complicated relationship with Boone, minus a few details. Sayid is understanding, even when she tells him she'd prefer to take things slow, asking if she's sure she doesn't want to go back. He had no expectations of the day. "Hopes," he says, "but not expectations."

Charlie and Jin arrive with towels and hot water at the clearing, where Claire has resumed contractions. Charlie repeats Jack's instructions to Kate and tells her, emphatically, that she must deliver the baby; neither he nor Jin are up to it. Claire is afraid, but Jin reassures her in Korean and Kate gets control of herself to help Claire calm down.

Jack is examining Boone. He realizes the transfusion isn't working, but perseveres anyway. Sun pulls the tube out of his arm and says he's given enough. Jack thinks the blood is pooling in Boone's leg. The wounds aren't consistent with a fall; it's more like the leg was crushed by something. Jack sends Hurley to get Michael.

Michael and Jack are at a nearby cargo container from the plane while Sun watches after Boone, who has taken a definite turn for the worse. His right leg is filling with blood. If it isn't removed, Jack won't be able to save him at all. Jack practices using the cargo door as a guillotine on a log. It's a clean cut. ♪

Kate decides the contractions are close enough together that Claire needs to start pushing. Instead, Claire holds her breath. She's trying to hold the baby in. Kate sees what she's doing and tells her to stop, but Claire is afraid the baby won't want her. She's scared it will know she planned to give it away. She says, "Babies know that stuff." Kate asks Claire if she wants the baby now and if she wants it healthy. She does, and Kate informs her the baby must know that too. Finally, she gets Claire to push. Charlie wants to run in and help, but Jin sagely waves him off.

Sun notices Boone has started coughing blood. Jack and Michael move Boone to the cargo door and prepare to cut off his leg. Michael doesn't have the stomach for it, and Jack lets him walk away. Sun feels it's already too late to make it worthwhile, considering the internal bleeding. She walks away in protest. Jack prepares to swing the door himself.

Just as Jack is about to amputate the leg, Boone cries, "Wait, wait!" Jack says Boone will die if he doesn't take the leg. Boone tells him to let it go. He knows his injuries are fatal and even if Jack takes the leg, he'll probably die anyway. Boone says Jack made a promise, but he's letting him off the hook. ♪

Kate continues to talk Claire through labor. The head crowns, Claire gives one more big push, and she has a healthy baby boy. Nearby, Charlie and Jin celebrate.

Claire carries her new baby out to the beach where she's warmly greeted by the rest of the camp. Hurley points out to Jack that Shannon and Sayid are returning from up the beach, and Jack walks over to tell Shannon about Boone.

In the caves, Shannon cries over Boone's body. ♪

On the beach, Kate catches Jack as he's heading towards the jungle with a backpack and some water. She tries to talk to him about Boone's death, but Jack says Boone didn't die. He was murdered, and Jack is going to find John Locke.

The Season 1 soundtrack includes the cue "Life and Death", which closes this episode.

Retrieved from "https://lostpedia.fandom.com/wiki/Do_No_Harm?oldid=1116337"
Community content is available under CC BY-NC-ND unless otherwise noted.