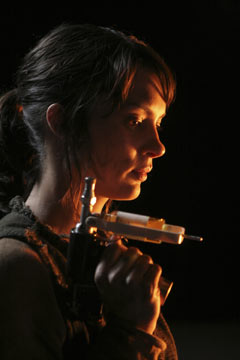 Also see Diana for the employee of Mittelos Bioscience

Diane appeared to have been the only female member of the strike team sent to kidnap the women from the beach camp. Upon arriving at the beach camp, she informed Pryce that Juliet had done her job and that three of the camp's tents were marked with white coral.

Unlike the other members of the strike team, Diane wasn't equipped with a live firearm, but instead with what appeared to be some sort of drug-delivery device loaded with a substance (most likely a sedative to use on the pregnant women).

She was one of the first to realize that the marked tents were in fact rigged with dynamite, but perished in the subsequent explosion of a tent which was detonated by Sayid. ("Through the Looking Glass, Part 1")

Retrieved from "https://lostpedia.fandom.com/wiki/Diane_(Other)?oldid=1106284"
Community content is available under CC BY-NC-ND unless otherwise noted.