The Dharma booth video was shown at Comic-Con 2008 during the Lost panel. It features Dan Bronson, one of six individuals who "passed" the Dharma recruitment drive in association with Octagon Global Recruiting, secretly filming a classified video presented to him by Dharma employee Hans Van Eeghen. The secret video is filmed by Daniel Faraday, and shows Pierre Chang on the Island in the 1970s making a plea to those 30 years in the future to change the past so the Purge can be avoided. The video was later described by producers Damon Lindelof and Carlton Cuse on the May 11, 2009 Official Lost Podcast as non-canonical to the storyline of Lost, due to a different story arc having been chosen for Daniel Faraday for Season 5.

The video starts from the point of view of Dan Bronson's hand-held video camera, as he is secretly taping events at the Comic-Con convention. Hans Van Eeghen leads him through the convention center to the Dharma booth, where he proceeds to show a video which he says is classified.

Pierre Chang sits down in front of a camera in his house at the barracks. He introduces himself as Marvin Candle, an alias he has used in the past, but quickly interrupts himself and states his real name, acknowledging that those watching the video would know it. As a baby keeps crying in the background, he gets up and asks Lara to take him outside, as he only has one chance at this.

As static continues to interrupt the video, Pierre explains that he is a professor of theoretical astrophysics from Ann Arbor, Michigan and was brought to "this godforsaken island" to conduct experiments to study the Kerr metric solution of the Einstein field equations. He estimates that the video should be able to be seen roughly 30 years in the future, via a "pinhole" that he is trying to keep open. Pierre shows his knowledge of the future by referencing president George W. Bush and the Internet and adds that he and his colleagues are inevitably going to die in a violent purge. He claims that his source for this information has proven to be reliable.

Daniel Faraday (note: see Trivia) then interrupts from behind the camera to say that none of that matters and urges Pierre to get to the point. Pierre continues and says that the transmission's success would validate his work on the Island, which he says has "extraordinary properties". He then emphasizes to the viewer the importance of reconstituting the DHARMA Initiative and that its research must be resumed immediately, saying, "Time is not just of the essence, it is the essence." Pierre expresses his hope that the past might be able to be changed to save his group and to stop what's about to happen.

Daniel interrupts again, saying that its useless and that the transmission will never be seen. Pierre gets very upset as Daniel tries to turn off the camera. The video turns to static.

Hans notices that Dan is recording the classified video and calls for security. Dan runs out of the booth and into the main convention area, excited that he obtained the video. 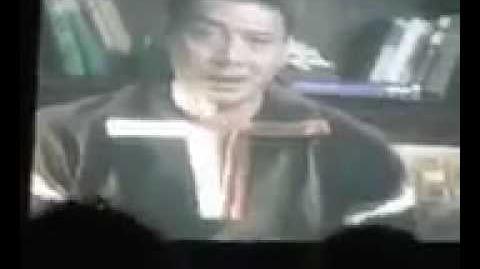 (POV of hand-held video camera at waist level following a man in a suit, Hans, through what is apparently a convention center outer lobby)

HANS: (Turns around toward Dan as he passes through a door): [indistinct]

HANS: and here we are.

(Camera blacks out briefly, then returns to a view of Dan inside the booth)

DAN: this is ridiculous I, I we they made me fi- sign like fifty confidentiality suits, that I won't dub out the contents, blah blah blah, who gives a [censor bleep], I'm doing or dying, that's my mentality, I'm go to show this to you and you're going to see it. Live. On tape. oh my god here comes... here comes here comes Hans!

HANS: For obvious reasons, the video that you are about to see is classified. (Camera pans then zooms between other viewers to a full view of the monitor which begins to play the Dr. Chang video):

(As the video goes to static, the camera view zooms out just in time to see Hans lean into view in front of the monitor, looking straight into the camera)

HANS: Is that a camera? (Hans reaches his hand directly toward the lens) What is a camera doing here? Security!

DAN: (camera briefly turns to Dan's face as he screams) I GOT IT!!! (camera moves through a view of the crowded convention floor)

DAN: [out of breath, indistinct:] I gotta save myself, I gotta show this(?)

(Fade into green "LOST" promo slide: "returns with all new episodes - 2009" and "watch episodes of Lost on abc.com")

The pinhole Chang mentions is notable because the Kerr metric is the solution to Einstein's field equations of his Theory of General Relativity describing the warping of spacetime caused by a rotating black hole. In such warped spacetime, Einstein's theory says that everything, including light, moves through both space and time in the vicinity of such a black hole. This is a consequence of the curving of spacetime caused by the black hole or, as we usually call it, gravity. It is notable that the Kerr metric describes a non-charged, rotating black hole. The Kerr-Newman metric describes a black hole that is rotating and also has charge, which may be a more likely candidate describing the spacetime around the Island.

The Kerr metric (as well as the Kerr-Newman metric) allows for two interesting and relevant phenomena: first, in theory a Kerr black hole can produce a wormhole, although the stability of such wormholes is unclear. A wormhole theoretically is a gateway between two different sections of space and time. More importantly, near a Kerr black hole it is possible to travel along a "closed timelike curve", essentially time travel into one's past.