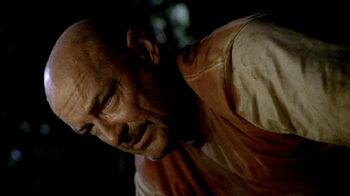 "Deus Ex Machina" is the nineteenth episode of Season 1 of Lost. After a mysterious dream, Locke sets out with Boone to find a crashed Beechcraft, in the hope that it will lead him further on his quest to open the hatch. Meanwhile, at the beach, Sawyer begins to suffer from severe headaches. Flashbacks in this episode concentrate on Locke's first meeting with his biological mother and father.

Years before the crash, Locke works in a discount superstore. He demonstrates the children's game, Mouse Trap, to a boy, saying it was his favorite game and he used to play it with his "brother." A mysterious older woman appears to be watching him in the store. When Locke approaches her, she asks him where the footballs are.

Later Locke sees her in the parking lot. He starts to chase her and is knocked over by a car. Locke gets back up, catches her, and confronts her. She reveals she is his birth mother, Emily Locke. John inquires about his natural father, but she tells him he has no father, and he was "immaculately conceived."

Locke hires a private investigator, Frainey, to find information on his father and mother. The investigators tell him his mother has been committed in the past due to schizophrenia. She was admitted several times to the Santa Rosa Mental Health Institute. When Locke asks about his father, Frainey is hesitant. He says these things are not meant to be and gives Locke a choice: to find his father or not. Locke says he wants to meet his father, and the private investigator gives him the address of his father, Anthony Cooper. ♪ Locke goes to his father's home, where he is admitted and welcomed. Cooper says he did not know he had a son because Emily told him she was not going to have the baby. Cooper claims he found out about Locke a year later, when Emily asked him for more money.

Cooper takes him hunting several times. Arriving early one day, Locke sees his father is on dialysis. Cooper says he will need a kidney transplant, but is pessimistic about his chances on the waiting list. Locke volunteers to give his father one of his kidneys. Just before the kidney transplant, Locke says, "This was meant to be," and Cooper tells his son he will see him after the operation. ♪

After the transplant, Locke wakes up in the hospital to find his father has gone home for private care. His mother appears and says his father concocted a scheme to convince Locke to give up his kidney. Locke pulls himself out of the hospital bed and drives to his father's home, where the once-friendly guard is not allowed to let him inside. Locke drives away at the guard's pained insistence, and screams at the betrayal. ♪

Sawyer is having increasingly painful headaches, which are not helped by Sun's herbal remedies or Aspirin. He refuses to tell Kate of his problem, so Sun tells her. Kate goes to Jack to ask for his advice, but once learning he has to help Sawyer, he claims he will get nothing out of it except for a snappy one-liner and, if he's lucky, a new nickname. After convincing Jack to help, she also convinces Sawyer to accept Jack's medical assistance.

Before seeing Sawyer, Jack talks to Michael, who says the burning of the raft was not a total loss, because it saved him from trial and error. Michael tries without much success to communicate with Jin, who is also working on the raft.

After a brief examination, Jack asks Sawyer a series of embarrassing questions regarding his sexual past, such as his experiences with prostitutes, if he has ever contracted an STD and when his last outbreak was. After needling Sawyer, Jack tells Sawyer he is just suffering from farsightedness. Sayid melts together the halves of two pairs of glasses for him to wear. ♪

Locke and Boone continue working on opening the Hatch. Boone complains that he knows nothing of the self-built trebuchet they have, they have been going to the Hatch for two weeks, and Locke never talks about himself. Locke replies that his past would bore Boone. They attempt to break the glass on the metal door using the trebuchet, but the attempt fails. ♪

Locke, angry it didn't work, is unaware that a broken shard has lodged itself in one of his legs until Boone points it out to him; he discovers he has no feeling in his feet or legs. ♪ Locke says the trebuchet was not strong enough to break open the Hatch. ♪ When asked about how they will open the Hatch, he tells Boone the Island will send them a sign.

Boone starts to complain about Locke's obsessiveness on getting in the hatch. Locke says the Island will give them a sign, and when Boone questions his statement, they both see a small aircraft crashing into the jungle. Locke sees an image of his mother pointing in the same direction, and finds himself in a wheelchair again. It turns out to be a dream, which concludes with Boone, covered in blood, repeating the phrase, "Theresa falls up the stairs; Theresa falls down the stairs." ♪ Locke wakes up, waking Boone up too, saying they have to go.

Later that day, Locke describes the vision he had, claiming it felt real. He claims he knows where to go now, and what they'll find will open the hatch. Boone suspects Locke has used the hallucinogen he gave Boone, but Locke asks Boone who Theresa is, and Boone, startled, doesn't understand how Locke could know about her. Locke says he himself doesn't know. Boone says he probably mentioned Theresa before, to which Locke disagrees. Locke suddenly falls, alarming Boone. Locke keeps saying he is fine, and suddenly finds a rosary on the ground. Boone theorizes someone from camp hiked all the way to where they are, but Locke pulls a vine which causes a dead body to fall from a tree.

Locke insists they have to locate the plane, which is eventually found hanging in the trees. Boone and Locke investigate the corpse and discover it's from Nigeria, wearing a priest's clothes, with a large amount of money and a golden tooth. Locke says it's probably been on the Island for two to ten years. Boone wonders why a Nigerian priest would be on an Island in the South Pacific, when Locke finds a gun on him, he comes to the realization he wasn't a priest.

While trekking, Boone notices John's left leg, the one that wasn't hurt by the glass shard, can barely walk. Suddenly Locke completely falls. He refuses to go to Jack, claiming Jack wouldn't know what happened. Boone asks Locke if he's crazy, driving Locke to tell Boone he was in a wheelchair for 4 years before the crash. When asked about how he got into a wheelchair, Locke says it doesn't matter anymore, as the Island healed him, but now it's trying to take it back, and it wants Locke to follow what he saw. He says he believes whatever is in the plane will help them get into the hatch. Boone understands, and Locke asks him to help him up. ♪

While resting, Boone says Theresa was his nanny, who he kept calling up to his room, which was on top of a high flight of stairs. He used to call her up and down for no reason, until one day she fell down and broke her neck when Boone was six. Locke starts to laugh, much to Boone's anger, but Locke sees the plane he saw in his dream, stuck in a tree. Locke tells Boone to go up there and find out what's inside the plane.

Boone climbs into the plane, and discovers the plane contains Virgin Mary statues filled with heroin. He throws one of the statues down to Locke to prove to him the plane meant nothing. Boone sees a radio, which surprisingly still works, and he subsequently makes contact with another person. Boone says they are the survivors of Oceanic Flight 815. After a brief pause, the other person responds, saying, "We're survivors of Flight 815." Then, the plane falls out of the tree and crashes to the ground with Boone inside. Locke rushes over and hoists a badly injured Boone on his shoulders and returns to the camp.

Locke makes his way back to the caves with Boone, saying Boone fell from a cliff while they were hunting. Jack springs into action and Locke disappears into the jungle, returning to the Hatch. He yells and screams in anguish, asking the Island what else he has to do. As he bangs his hands on the door, a light comes on inside the structure, and then turns off. ♪

The new statement of Locke's second theme that concludes the episode appears on the Season 1 soundtrack as "Locke'd Out Again". The episode also introduces a new mystery theme for Locke and two motifs that characterizes Locke and the Man in Black. The music that plays during Locke's dream later returns during a few other dream sequences.

Retrieved from "https://lostpedia.fandom.com/wiki/Deus_Ex_Machina?oldid=1093521"
Community content is available under CC BY-NC-ND unless otherwise noted.