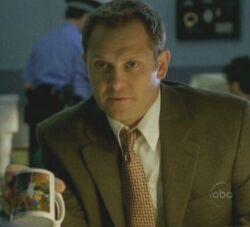 Detective Calderwood interrogated Sawyer in a Sydney police station on the day of the flight. His mug had been broken by Sawyer three nights before when Sawyer had been arrested in a bar fight. He knew that Sawyer's real name was "James Ford" and had a file on him. He advised Sawyer that he was being deported, that his flight was leaving that afternoon, and that he was prohibited from ever returning to Australia.

Retrieved from "https://lostpedia.fandom.com/wiki/Detective_Calderwood?oldid=1095635"
Community content is available under CC BY-NC-ND unless otherwise noted.