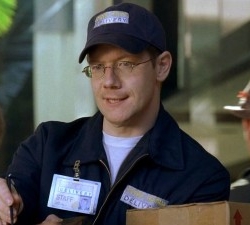 A delivery man brought a package to the receptionist in the Widmore Corporation building. He said the package was for 815, which reminded Desmond of the numbers. The man worked for "London Central Delivery", as identified by the logo on his cap.

Retrieved from "https://lostpedia.fandom.com/wiki/Delivery_man_(Flashes_Before_Your_Eyes)?oldid=1116213"
Community content is available under CC BY-NC-ND unless otherwise noted.