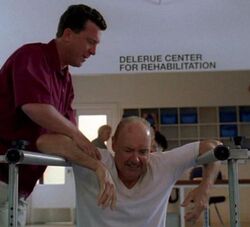 The Delerue Center for Rehabilitation was where Locke received physical therapy for the injuries he sustained in his fall. One of the orderlies at the Center was Matthew Abaddon. ("Cabin Fever")

Retrieved from "https://lostpedia.fandom.com/wiki/Delerue_Center_for_Rehabilitation?oldid=1043445"
Community content is available under CC BY-NC-ND unless otherwise noted.