Start a Wiki
"Dead Is Dead" 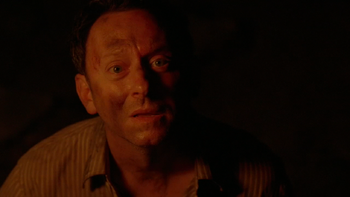 "Dead Is Dead" is the twelfth episode of Season 5 of Lost and the ninety-eighth produced hour of the series as a whole. Ben, Locke, and Sun travel to the Temple so that Ben can be judged by the Monster. In flashbacks, the origins of Ben and Widmore's troubled relationship are revealed. The episode was originally broadcast on April 8, 2009.

"Dead Is Dead", among all episodes of Lost, attracted the smallest audience during its original airing.

Charles Widmore arrives at the Others' camp on horseback. After a short exchange with Richard Alpert, he enters a tent in which young Ben, still recovering from his gunshot wound from Sayid, is staying. As they chat, it becomes clear that Ben does not recall how he was injured. Widmore tells Ben that they will send him back to live with the DHARMA Initiative soon, but assures Ben that he can still be one of the Others.

Ben and a young Ethan Rom stand outside a camp, watching a tent. Ethan attempts to convince Ben to let him take charge, but Ben tells Ethan to be quiet and enters the camp alone. Inside the tent is a sleeping Danielle Rousseau. Ben lifts his gun to kill her, but her baby awakens and begins crying, and Ben knocks over Rousseau's music box. ♪ Rousseau questions Ben about what he is doing there, and assumes that he is a carrier for the infection. Ben takes the baby in his arms, firing a shot into the sand and telling Rousseau not to move. ♪ He tells her that the child will be safe with them, and that she should consider herself lucky to be left alive. He then tells her that every time she hears whispers, she is to run the other way. Ben leaves the tent and the beach with the baby and Ethan.

Upon Ben's return to camp, he is angrily confronted by an aging Charles Widmore, who demands to know why Ben is holding a baby. Ben is angered that Widmore had not informed him of the baby prior to his accepting this mission. Ben says Rousseau poses no threat to them. Widmore demands that Ben kill the baby, claiming it to be the will of Jacob. Ben refuses, and instead proposes that if it were indeed the will of the Island, Widmore should be able to do it instead. Scoffing, Widmore turns his back and leaves Ben holding the baby. ♪

At the Barracks, Ben is pushing a young Alex on a swing set when he is approached by Richard. Richard informs Ben that the submarine is about to leave, but that Ben does not need to see its passengers off if he does not want to. Ben feels he needs to, however, and goes to the dock, where Widmore is in restraints and being led by armed guards to the submarine. Ben speaks to Widmore, who feels Ben has come to "gloat" about his victory in having Widmore exiled. Widmore has been exiled for "breaking the rules": namely, for regularly leaving the Island, and for having a family off the Island (specifically, a "daughter with an outsider"). Widmore scornfully tells Ben that he will have to one day choose between Alex and the Island. He is then led to the submarine and exiled.

After leaving Jack and the others in LA, Ben is walking along a marina and calls Charles Widmore, informing him that he is going to kill Widmore's daughter, Penny, who is also at the marina. As he approaches to do so, he is met by an arriving Desmond, unloading groceries from a car. When he asks Ben what he is doing there, Ben shoots Desmond once in the chest, causing him to fall to the ground. Ben then continues on to the boat, where he holds Penny at gunpoint, telling her that her father killed his daughter. Penny maintains that she has no relationship with her father. As Ben prepares to shoot her he sees Penny and Desmond's son, Charlie. Ben then lowers his gun, but is tackled and severely beaten by Desmond, who then uses both arms to lift and throw him off the dock and into the water.

Ben awakens to find Locke sitting over him. Ben exhibits surprise that Locke is alive, but tells Locke that he expected his resurrection. He also tells Locke that he broke the rules and has to face the consequences, which will result in being judged by the Monster. Ben then travels out to the beach, where several survivors, including Bram and Ilana, are trying to transport a crate filled with what they call necessary supplies. Ben speaks to Caesar about Locke, telling him that he doesn't believe that Locke was on the plane. Ben feigns ignorance when Caesar informs him that Locke believes that Ben killed him, saying that Locke is insane and dangerous. Caesar tells Ben that he "has his back," and shows him the shotgun he had taken from Ben's office earlier. Later at the Hydra office, Ben browses the desk for something. When he finds a picture of himself and Alex, he opens the frame and puts the photo into his pocket, just when Locke enters the room. Locke demands to talk with Ben about the fact that he killed him. Ben replies that it was the only way to bring him back, as well as the rest of them and that he had vital information. Locke then said to him that he wanted an apology, but goes on and offers his help to Ben facing the Monster.

Ben and Locke prepare to travel to the outriggers, intending to take one of them to the main island in order for Ben to be "judged" by the Monster. Suddenly, Caesar and three other survivors appear, and confront the two. Caesar asserts his position as the leader, and forbids the two to use the outriggers to go anywhere. Locke refuses to listen, and Caesar attempts to draw his shotgun, but it isn't there. Ben reveals that he has it, and blasts an unarmed Caesar in the chest. He then tells the three remaining survivors to go away. Ben gives John the shotgun and tells him to consider it as an apology for murdering him, as John has earlier demanded. They then set sail for the main island in the boat.

Upon arrival, they rest for a moment at the dock. ♪ As Locke puts on Christian Shepherd's shoes before stepping on the Island, he tells Ben that he believes Ben is only seeking forgiveness for the death of Alex. Ben does not confirm or deny this. They travel on to the Barracks, where they see a silhouetted shadow pacing in the window of Alex's old room. Upon investigation, Ben finds that it is Sun. Frank is also in the house, and they tell Ben that a man named Christian told them to wait there for John Locke, who they discover is standing just outside. Sun shows Ben the photo of the DHARMA recruits of 1977, and expresses surprise that Ben doesn't know that their friends were in the DHARMA Initiative.

Frank warns Sun about listening to a dead man and a murderer, but Sun asserts she would follow them if there's a chance Jin would still be alive. Ben retreats to the secret room hidden in his closet behind the bookcase, where he drains a pool of muddy water in an attempt to summon the Monster. He says aloud, almost as an afterthought to the hole, "I'll be outside." He then goes outside to wait with Sun. Sun says that Jack probably lied about John's death to convince them to return to the Island, but Ben reveals to her that Locke was dead and that he had no idea Locke would be resurrected; he had never seen the Island perform such a miracle. Frank leaves to return to the Hydra island after failing to convince Sun to come with him.

The Monster doesn't appear, and Locke tells Ben that they need to go to find it. Ben claims that he does not know where the Monster lives, but Locke tells him that he does. Ben and Sun follow Locke to the Temple walls. ♪ Locke then reveals that they are going to be entering through a hole in the earth. They do so, though Sun remains outside. Before Ben enters, he tells Sun that, if she might leave the Island, she should find Desmond and tell him that he is sorry. When Sun asks for what, Ben tells her that Desmond will understand.

Meanwhile, Frank arrives back at Hydra Island in the outrigger. He is soon approached by Jed, who warns him that Ilana and a few other survivors have weapons. Frank, cautious, walks into camp, where he is suddenly held at gunpoint by Ilana and Bram. Ilana asks Frank, "What lies in the shadow of the statue?" When Frank is unable to answer, she knocks him out with the butt of her gun, and tells Bram to get everyone else, tell them "it's time," and to tie Frank up, as he's coming with them.

Once underground, Locke and Ben light torches. Ben tells Locke that he believes that Locke's reasoning was right, and that he is seeking penance for Alex's death. Soon afterward, the ground underneath Ben gives way and he falls into another level of the Temple. Locke tells Ben that he will go get something to help Ben back up, and leaves, ignoring Ben's commands not to.

Ben then journeys on, looking at columns covered in hieroglyphs, pausing to observe a stone panel covered in Egyptian-style carvings, which depicts the Monster and a jackal-headed figure (possibly the Egyptian deity Anubis) facing each other. Below the carving is a stone grate angled upwards. Ben hears the trademark noises of the Monster, and witnesses it rise out of the grate in front of him. The Monster surrounds Ben, swirling about him.

He is faced with memories of Alex and Widmore, including Alex's death at the hands of Martin Keamy. After showing these visions to Ben, the Monster abates, followed by the appearance moments later of an apparition in the form of Alex. Ben apologizes to Alex, admitting fault in everything, which she acknowledges. She then pins him up against a nearby column, informing Ben that she is aware of his plan to kill Locke again, and demanding his firm dedication to follow Locke's leadership, or she will "destroy" him. Ben promises, and Alex disappears. Locke calls Ben back to the hole and lowers a vine in order to pull him up. Ben reveals that the Monster has let him live. ♪

The Season 5 soundtrack includes the track "Alex in Chains" from this episode.

For fan theories about these unanswered questions, see: Dead Is Dead/Theories

Retrieved from "https://lostpedia.fandom.com/wiki/Dead_Is_Dead?oldid=1113966"
Community content is available under CC BY-NC-ND unless otherwise noted.