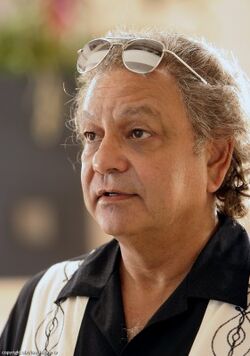 David Reyes is Hurley's father, and husband of Carmen Reyes.

When Hurley was young, they worked on fixing up a Camaro together, with David promising his son that if they fixed it, they'd drive to the Grand Canyon. But David then left the family for 17 years, only to be brought back by Carmen after Hurley had won the Lotto.

David was given the task of convincing Hurley he was not cursed by the numbers and shouldn't go to Australia. He took Hurley to a fortune teller, whom David had paid off to "get rid" of the curse. Despite his best efforts, David was unsuccessful in this task, and Hurley left for Australia. ("Tricia Tanaka Is Dead")

Hurley told Charlie that he learned to fish on the Santa Monica Pier with his "old man." It is unclear when the two spent time fishing together. ("Walkabout")

After the rescue of the Oceanic 6, David was present when Hurley arrived on the mainland, and greeted Hurley along with Carmen. After Hurley returned home one day, David and Carmen surprised him with a birthday party. During this party, David took Hurley outside to show him the Camaro he had fixed as a "tribute to Hurley," because it "felt like Hurley was with him." Hurley eagerly gets into the car, but is startled to see the numbers in the odometer. David waves this off as a coincidence, but Hurley disagrees and runs away, much to his father's chagrin. ("There's No Place Like Home, Part 1")

Years later, after his son was re-admitted to Santa Rosa Mental Health Institute, David watches an episode of Exposé when he hears a knock on the front door. It is his son, carrying an unconscious Sayid. Hurley tells his father that Sayid was shot with some darts, but David believes he's lying. The LAPD arrive at the mansion, and David tells them that he hasn't seen Hurley. Hurley doesn't give much away when questioned by his father, but tells him they can't go to a hospital, but that he has an idea. Hurley notes that the police are staking out the mansion, and David asks his son if he is, in fact, crazy. Hurley tells him he has a good reason to lie. After Carmen returns home, David leaves the house in his car, nervously waving at the police as he drives past.

David meets up with Jack and asks if he can trust him. David shows Jack that he has Sayid in the back of his jeep. Jack wants to know who is with Hurley at the mansion, and takes Sayid to a hospital. David tells Jack to stay away from Hurley. ("The Lie")

After Hurley returned to the Island on Ajira 316 and time traveled to 1977, he told Miles about how his dad left when he was 10, but he gave him a second chance and they became the best of friends. Hurley stated that he may never see his dad again, but misses him, and knows his father feels the same way. ("Some Like It Hoth")

For fan theories about these unanswered questions, see: David Reyes/Theories

Retrieved from "https://lostpedia.fandom.com/wiki/David_Reyes?oldid=1116277"
Community content is available under CC BY-NC-ND unless otherwise noted.