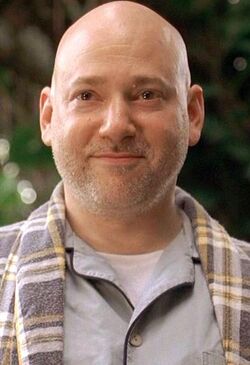 Dave was Hurley's imaginary friend, which he hallucinated while an inmate at the Santa Rosa Mental Health Institute. Hurley saw Dave again while on the Island, a setback in his battle against mental illness.

In "Dave", Hurley repeatedly saw Dave and talked about him with his psychiatrist, Dr. Brooks. The doctor said that Dave was a bad influence who tried to keep Hurley from losing weight or changing. He eventually took a photo as Hurley posed with his arm around Dave's shoulder's. The finished photo showed Hurley's arm hanging over empty air, with no sign of Dave.

Despite the photo's revelation, Dave appeared again to Hurley, offering him more food and encouraging him to break out of the facility. Hurley refused, and his later refusals to listen to Dave led to a breakthrough in his therapy and his eventual release.

Hurley saw Dave on the Island as the survivors scrambled to gather food from the supply drop. Dave lost a slipper when Hurley chased him through the jungle, and Hurley imagined picking it up. Libby, watching him, saw no slipper.

Dave tried convincing Hurley that he'd never left Santa Rosa and was currently hallucinating his experiences on the Island. He'd based the numbers in the Swan, said Dave, on the numbers he'd heard Leonard Simms mutter, and he'd hallucinated Libby, a woman too attractive to ever actually take interest in him. Dave jumped off a cliff, telling Hurley that doing the same would wake him from his hallucination. Hurley nearly followed suit, but Libby arrived and talked him out of it.

Retrieved from "https://lostpedia.fandom.com/wiki/Dave_(Hurley%27s_friend)?oldid=1112532"
Community content is available under CC BY-NC-ND unless otherwise noted.