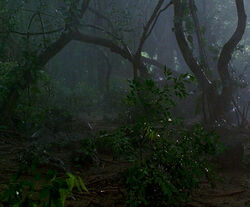 The Dark Territory was a region on the Island home to the Black Rock and Rousseau's camp and where the Monster was highly active. Its location was several hours somewhere northeast of the survivors' camp.

This region was apparently named by Danielle Rousseau, who called it the "Territoire Foncé". On her map she labeled it, "L'ENDROIT LE PLUS DANGEREUX" (Translated: "The most dangerous place"). ("Whatever the Case May Be").

Danielle Rousseau took the survivors into the Dark Territory to retrieve sticks of dynamite from the Black Rock, a ship that was located unusually deep in the Island's jungle. ("Exodus, Part 1")

The Monster appeared to be more active in this region; it attacked the survivors during their mission to retrieve dynamite from the Black Rock, nearly pulling Locke underground. ("Exodus, Part 2")

The blast door map contained the phrase, "Primary nexus of Cerberus related activity", in close proximity to the Black Rock. ("Lockdown") Carlton Cuse and Damon Lindelof confirmed that "Cerberus" was an alias for the the Monster at Comic Con 2007's Lost panel.

The Hy-bird was first seen by Hurley, Jack, Locke, and Kate while on their way back from a trek to the Black Rock that Rousseau led them to in order to gather dynamite with which to blow open the Hatch. ("Exodus, Part 2") Weeks later during a journey across the Island, as the "Hurley Bird" swooped down from a perch, it made a cry that Hurley said sounded like his name. Michael also tried to shoot it before realizing his gun was not loaded. ("Live Together, Die Alone, Part 1")

The Bésixdouze expedition was heading towards the radio tower, led by Jin, when Nadine went missing. The group searched for her in the Dark Territory, and encountered the Monster. The Monster dragged Montand to a temple, and attempted to pull him inside of a cerberus vent. The science crew tried to pull him back, but the Monster ripped off one of his arms, succeeding in dragging Montand into the vent. ("This Place Is Death")

Rousseau led Jack, Kate, Locke, Hurley, and Arzt there in order to obtain dynamite from the the Black Rock. ("Exodus, Part 2")

Locke led Sawyer to the Black Rock in the Dark Territory in order to manipulate him into killing Anthony Cooper. ("The Brig")

Ben and the Man in Black, in the form of John Locke, went back to the Temple wall and entered it. Ben was separated from Locke, which allowed Locke to take the form of the Monster and judge Ben in the room below the tunnels. ("Dead Is Dead")

Jin led Jack, Kate, Hurley, and the wounded Sayid to the Temple per the instructions of Jacob. They found Montand's dead body and the hole that Ben fell through to be judged by the Monster. The Others captured the group and brought them to the Temple. ("LA X, Part 1")

Later on, Hurley, Richard, Jack, Ben, Sun, and Frank returned to the Dark Territory for the final time to get dynamite from the Black Rock, before Hurley blew it up. ("Everybody Loves Hugo")

Retrieved from "https://lostpedia.fandom.com/wiki/Dark_Territory?oldid=1104499"
Community content is available under CC BY-NC-ND unless otherwise noted.