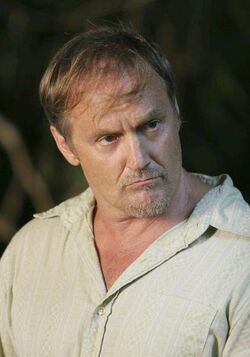 Danny Pickett was one of the Others. He appeared to be an aide to Tom and Bea, and he played an administrative role as a quarry supervisor and may have been involved in Karl's punishment. He was Colleen's husband. After she was shot dead while unarmed by Sun, he took out his anger on Sawyer and almost killed him. He was killed by Juliet on Day 73. His name appears on Jacob's wall, meaning that he was a candidate.

Chronologically, the earliest mention of Pickett was from a reference from Ben during the time when Goodwin died. Ben brought Juliet to Goodwin's body and Ben mentioned Danny and Tom were searching for the tailies and were unsuccessful in finding them. ("The Other Woman")

During the second season, Pickett was a relatively minor character on the sidelines in the storylines of the Others, particularly those of Tom and Bea. ("Three Minutes")

He first appeared during the Others' capture of Michael. Michael had left the other survivors in search of his son Walt. Pickett distracted Michael by urinating on a tree, so Tom could surprise and capture Michael from behind. ("Three Minutes")

Pickett displayed his belligerence when Michael freed himself from Tom's grip and started to shoot with a second firearm. Pickett immediately returned fire, but was stopped by Tom who claimed they needed him, then re-captured him with a non-lethal slingshot. ("Three Minutes")

Later that day, the Others also captured Kate. That evening the survivor's "Hunting Party" of Jack, Sawyer, and Locke challenged Tom at the line. Pickett, Alex, and the others were hidden out of view nearby, with Michael and Kate gagged and bound as hostages. When Tom asked Alex to bring Kate out to end the confrontation, Alex begged Pickett to do it instead, and he complied. ("The Hunting Party") ("Three Minutes")

Afterwards, at the Decoy Village, Pickett appeared to be working under Ms. Klugh. He took a blood sample from Michael, then later brought Walt to Michael's hut, and took him away again when Walt tried to tell Michael that the Others were misrepresenting themselves. ("Three Minutes")

After four days, at the Pala Ferry dock, Danny witnessed the exchange between the Others and Michael. However he did not actively participate other than kicking Sawyer in the stomach when he called Tom "a son-of-bitch". This would be the first of many violent encounters between Pickett and Sawyer. ("Live Together, Die Alone, Part 1")

In contrast with his gruff appearance in Season 2, Pickett has appeared clean-shaven and neatly dressed in Season 3 (as have the rest of the Others). Following Kate, Sawyer, and Jack's first day on Hydra Island, Colleen was revealed to have a relationship with Pickett, as she kissed him before going on a mission, and he told her to be careful. Picket then brought Sawyer and Kate from the cages to the quarry to work, where apparently he had a supervisory role. This was the last time Danny saw his wife alive. ("The Glass Ballerina")

Pickett immediately was belligerent. He yelled at Sawyer for watching his conversation with Colleen, and at the quarry, he also beat and tasered Sawyer, as well as verbally harassed Kate. Sawyer escalated the conflict when he arranged an almost-successful escape attempt that began with his kissing Kate in defiance of Pickett. After Juliet arrived to foil Sawyer, Pickett again tasered Sawyer. This scene marked the first of a continuing pattern of abusing Sawyer and being resentful of his relationship with Kate. ("The Glass Ballerina")

The next day, Colleen returned mortally wounded from her mission. Sun had shot the unarmed Colleen in the chest while Colleen was attempting to reason with her. Jack, who was attempting to save her, crudely and insensitively ordered a grief-stricken Pickett out of the Hydra operation room, whereupon he went to the cages to take out his frustration on Sawyer by severely beating him and continuing until he had forced Kate to admit that she loved Sawyer. ("Every Man for Himself") Later at Colleen's funeral, Danny was seen kneeling at her coffin and crying. His wife's coffin was then lit on fire and pushed into the ocean, with the song "I Wonder" in the background. ("The Cost of Living")

On the fourth day as the Other's prisoners, Pickett came to the cages to take Kate to the quarry. When Kate suspected a ploy to get Sawyer alone, she insisted that Sawyer come to work too, and Pickett complied. Later at the quarry, Pickett stopped Alex's attack on the Others in search of Karl by threatening her with his gun and capturing her. In a further revelation of the hierarchy of the Others, Alex had been demanding to speak to Ben, while being suspicious that Pickett in particular had hurt Karl. ("I Do")

When Pickett brought Sawyer back to the cages, he threatened Sawyer's life by suggesting that he should say goodbye to Kate by tonight, a threat that Juliet also observed. ("I Do") This threat may have contributed to Sawyer and Kate sleeping together that evening. Later, when Jack began surgery on Ben, keeping both Ben, Juliet, and Tom occupied, Pickett took this opportunity to leave the operating room to kill Sawyer, despite Jason's suggestion not to. Pickett commented that Ben just put his life in Jack's hands, who was not even on Jacob's list. ("I Do")

Pickett and Jason made their way to the cages area, where he found Kate in Sawyer's cage. He dragged Sawyer out while Jason held Kate at gunpoint, and prepared to execute Sawyer at close range with his gun. As Pickett prepared to shoot, his motivations were clear as he told Kate to watch and added, "This is for Colleen, you son of a b----!" However he was interrupted when Tom called him on the radio, informing him that Jack had wounded Ben in surgery to hold him hostage. The scene ended as Jack demanded to have Sawyer and Kate released. ("I Do")

In an unexpected movement, Pickett and Jason were beat up and left unconscious locked in Sawyer's cage by Kate and Sawyer. Ivan who was sent by Juliet to hunt down Kate and Sawyer found the two conscious again and yelling for someone to let them out.

Once freed, the three of them headed after Kate and Sawyer, quickly catching them on the beach. Once again they failed to capture the two and quickly lost their trail as Sawyer and Kate were hidden in a hole by Alex. Pickett, Ivan and Jason headed out in the jungle in the wrong direction. ("Not in Portland")

Pickett later found Aldo and seemed to be angry at him for letting Kate, Sawyer and Alex in the building to rescue Karl. Pickett ignored Juliet's commands to let the three of them go and set off to find them. He later found Alex helping Kate and Sawyer into a boat along with a semi-conscious Karl, and prepared to shoot Sawyer. All of a sudden, Juliet appeared, calling his name. As he turned to look at her, she shot him twice, piercing his chest. His body was left there. ("Not in Portland")

For fan theories about these unanswered questions, see: Danny Pickett/Theories

Retrieved from "https://lostpedia.fandom.com/wiki/Danny_Pickett?oldid=1113713"
Community content is available under CC BY-NC-ND unless otherwise noted.