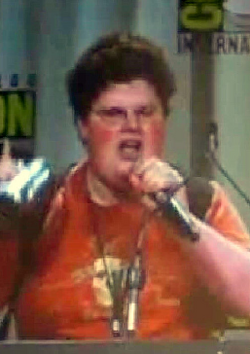 Dan Bronson is a character in the alternate reality game Dharma Initiative Recruiting Project. He appeared in real life during the Comic-Con 2008 Lost panel as a recruit that was selected to return to the Dharma recruiting center. He, along with four others, was brought to see a secret Dharma video at the Comic-Con Dharma booth featuring Pierre Chang. Bronson "secretly" videotaped the event with a handheld camera, running from the room back to the Lost panel, where he displayed his footage for all to see. According to the 8/08 email [1] sent out to all Dharma recruits (DIRP clues August 6, DIRP clues August 9), Bronson has been expelled from the Dharma volunteer program because of this event.

It is possible that Bronson is the same individual as RuckusGuy.

Retrieved from "https://lostpedia.fandom.com/wiki/Dan_Bronson?oldid=590533"
Community content is available under CC BY-NC-ND unless otherwise noted.