Paul Scheer, the artist who created Damon, Carlton and a Polar Bear, has publicly announced a series of Lost-related artwork.

Damon, Carlton and a Polar Bear 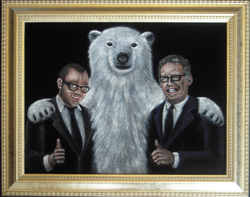 The painting, which depicts executive producers and head writers Damon Lindelof and Carlton Cuse, hugged by a polar bear, was given to Damon and Carlton at the 2009 Lost Comic-Con panel. The painting also shares its name with Paul Scheer's website, DamonCarltonAndAPolarBear.com.

During the days following the Lost panel, Scheer sent a printed reproduction of the painting, attached with a personal letter to a selected number of media outlets, prominently Bloggers DocArzt and Peter from Slashfilm. The same media outlets later received a letter from Ronie Midfew Arts, warning them of Scheer's unauthorized line of work.

On August 15, DamonCarltonAndAPolarBear.com was changed to display 16 frames, Which apparently will eventually become 16 original pieces of Lost Artwork.

The first version of the frame depicted Scheer, Midfew, Lindelof and Cuse, teamed up together in a Lost-decorated office. In the background, Scheer's Damon, Carlton and a Polar Bear can be seen.
Clicking on the image, an ad for the DHARMA Initiative's BANANA SPLIT SUNDAES is presented, featuring a four-toed statue, a MySpace website address and an address in Hollywood, Bardot-1715 N. Vine St Hollywood, which is the supposed location of the restaurant Bardot. The actual location of the restaurant, though, is 1737 N. Vine St. 1715 is the location of Judy Garland's Hollywood star; Garland is famous for her portryal of Dorothy Gale from The Wizard of Oz.

The sponsors at the bottom include "The Cobra Snake", "bpm" and "DIMMAK", and some of the guests include Steve Aoki, Fool's Gold, CatChdubs and Mike B. On Mike B's twitter page, a post from August 15th notes:

The poster's background also depicts DHARMA logos for the Flame, the Hydra, the Door, the Looking Glass, a question mark, the Swan, the Pearl, the Staff and another unidentified logo.

During the event, various Lost-related elements were shown, including a painting of the Black Rock, a hatch, and Sterling Beaumon appeared, dressed as young Ben moments after being shot, and directed the participants to head to the website, www.ActuallyItsKetchup.com

The morning after, the first Lost painting was presented, titled "Tim Doyle for The Numbers", featuring events from Hurley's life. Pictures from the party were also featured on the site.

Frame 2 was alluded to in a video of the events in Hollywood for Frame 1. At the start, a frame was shown of small red writing, believed to say "Frame#2. August 26". Sure enough, on Tuesday 25th, the main website showed "Newbury Wednesday" and a photograph of a crowd queuing on a street. It was found that the photograph was for 'Johnny Cupcakes' of 279 Newbury Street in Boston, and the site later updated with this information, along with a time of 10am EST and a message "tell them Horace sent you".

Arriving on the day, some fans were given laser-engraved skate decks with DHARMA logos on. Only 8 were given away, and only approximately 20 were made according to the main website. On the back of the skateboards was the URL, www.ThatAndBasketWeaving.com

Visiting that website revealed the second poster, titled "Olly Moss for Locke's Secret", featuring the life of John Locke. The frame proved popular, completely selling out before the release of a subsequent poster. Only two frames have so far accomplished this feat.

A 2D barcode appeared on the main hub site, which when read gave the letters "A-O-T-S". A second clue showed an image of legs and the word "DVDuesday". Taken together, this led fans to the website of the US television show "Attack of the Show" (where the legs also matched a poster of the hosts). Watching the show during the DVDuesday segment, a URL appeared as a subtitle, www.WeWereCaughtInANet.com

The poster is entitled "Methane Studios for The Dharma Van", featuring a floral design of the iconic vehicle.

An image of the words "Wall Street / Larchmont" appeared on the site hub, with pixels or crumbs falling off the words. Next, thirteen black circles were shown with the thirteenth seemingly separate from the other twelve, implying a baker's dozen. Taken together, these clues implicated Crumbs bakery chain, who have stores in Larchmont, California and Wall Street, New York. Later, a third clue with an image of a food product matched a duplicate image on the Crumbs bakery website. Visiting the Larchmont or Wall Street store at a time listed on the site resulted in the fourth URL, www.ICanGetYouPeanutButter.com

The poster is "Erin Tan for The Crash", focusing on Jack with various surrounding motifs. This frame proved most popular amongst Lost fans, being one of only two posters to sell out prior to the release of a new frame. More specifically it was also the fastest selling frame to date, selling out in approximately just one hour after release.

The first clue for frame 5 was simply an image of a library or book store. This was quickly found to correspond to an image of the University of Arizona bookstore on its official website. A second clue carried the words "Bear Down", the official motto of the University of Arizona. Finally, the message "Wildcat Readers, see you on - J. Perkins/R. Morrison" was added. Arizona Wildcat football team players Perkins and Morrison are team player numbers 9 and 14 respectively, indicating a Lost event on September 14th. Visiting the bookstore on this day, fans received bookmarks with the URL on, www.IThinkThatManWasYou.com

The frame is entitled "Leia Ball for The Love Triangle", showing the scene where Jack witnessed Kate and Sawyer together in the Hydra cages through the island's video surveillance system.

When this poster was revealed, Damen Lindeloff and Carlton Cuse further revealed that the poster contained two clues about Season 6. It was later revealed that one of the clues was the burning ankh in Hurley's hand. The second has yet to be identified.