On August 11, 2006, 11 PM LST, DJ Dan hosted a live call-in podcast lasting almost two hours. The podcast was aired on http://www.radioharvest.com, and fans were urged to email conspiraspiesunite@hotmail.com or call in at 800-942-4704 with their questions. Callers included many dedicated Lost Experience players, as well as Speaker, Lost Ninja, and Malick from Rachel Blake's video.

You can listen to the live broadcast here.

For ease of loading and editing, the transcript of this 110 minute broadcast has been broken into:

To the best of our collective knowledge, this is the first transcript on the web.

DJ Dan is known to make statements that are highly exaggerated, paranoid, and fabricated. Thus anything stated in this lengthy podcast cannot be considered necessarily true. However, he did point to many potentially relevant points for the Lost universe.

Each of these numbers is a page from the book Bad Twin. Take the first letter of the first word from each page and you get: "I know where he is, I can set it up!"

Ads for the live podcast were aired on ABC, and featured on websites for ABC.com, Channel 4, and Channel 7.

The following information was posted on DJDan.am in advance of the show, on August 2nd: 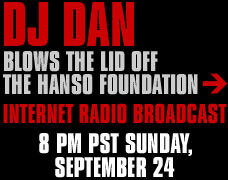 On September 24, 2006, 8 PM LST, DJ Dan hosted a second live call-in podcast lasting approximately an hour and a half. Callers included many dedicated regulars and culminated in Rachel Blake referring us to ABC.com to see her Norway Video.

The following information was posted on DJDan.am in advance of the show: