DJ Dan ("real" name Dan Lapinsky) is a character in The Lost Experience played by Lost writer Javier Grillo-Marxuach[1], who hosts a podcast about various subjects relating to the experience, including The Hanso Foundation and its many projects. DJ Dan's website, http://www.djdan.am/, was first discovered in the second line of HTML source code in Thehansofoundation.org, but was later replaced by the address of Rachel Blake's website. Since then he has sporadically released podcasts taking calls from his "ConspiraSpies" (the name he has given his listeners) and talking to his co-host Tonya.

Some of his podcasts are found on his website; however, most are found on other websites, most notably Letyourcompassguideyou.com [2] and Sublymonal.com [3]. Usually a password or some kind of code is involved, for example, if 108 is entered into Sublymonal.com, Dan's podcast starts to play. Most notably, there was a DJ Dan Live Broadcast on August 11, 2006. The second live podcast was broadcast on September 24th at 8pm PST. Rachel Blake announced the release of the final video via ABC.com on this podcast. The show also had the audio of Thomas Mittelwerk's imminent capture by authorities, and his destruction of the Hanso Foundation Headquarters, killing his pursuers in the process.

DJ Dan is one of the protagonists or "good guys" of this story of fighting the Hanso Foundation, along with Rachel Blake, Darla Taft and the Retrievers of Truth. He has also taken offense to this site for suggesting he is a work of fiction as part of The Lost Experience, and insists he is entirely real.

"We were diving off the Great Barrier Reef when we found this partially decayed shark carcass. Check out the logo on this guy...definitely not a tattoo or a brand..." -Richard P.

This resembles the shark with the DHARMA logo featured in the episode Adrift. The tattoo is similar to the logo of The Swan, with the addition of an extra line; however the logo on The Shark in the episode is unfamiliar.

It has recently been updated with a Glyph.

Eyes on the man

Originally displaying Alvar Hanso's photo, it now displays three photos of Thomas Mittelwerk. The first Mittelwerk photo links to The Hanso Foundation website, and the other two link to ads by the foundation; Life Extension Project and the Mathematical Forecasting Initiative.

It has recently been updated with a Glyph.

A picture of what appears to be a cross between a sloth and a bear, likely a picture of a Mapinguari, a legendary giant sloth from the Amazon. Supposedly, there was a gag script page that revealed the island monster to be a profane mapinguari! The author of the page was thought to have been Javier Grillo-Marxuach who appears to be playing DJ Dan in the entrance photo of the website.

The original copy of this image is apparently from the Illinois State Museum's Web site, as was first noted here. It is a photograph of "a reconstruction of Jefferson's ground sloth [Megalonyx jeffersonii] from the University of Iowa Museum of Natural History."

A section where fans can supposedly buy DJ Dan t-shirts. However, there does not appear to be any way to buy the advertised merchandise. It has recently been updated with a Glyph. 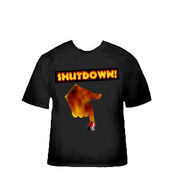 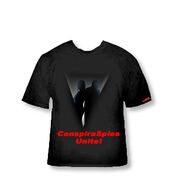 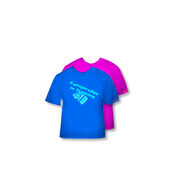 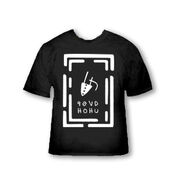 is rumored to have grown up in either Terre Haute, IN - Tulsa, OK - or Macon, AL sometime in the tumultuous 1960s. A veteran of Operation Desert Storm in the Army's Radio Corps, DJ Dan witnessed firsthand the darkest parts of the human struggle, from that point vowing to shed light on those who would seek to let greed and self-interest cheapen the value of human life. DJ Dan wishes not to speak or think for his audience. He merely hopes to give voice to those issues The Man would rather see buried and forgotten.

holds a Ph.D. in Communications from USC'S Annenberg School of Communications. Mother of two, she is often found reeling DJ Dan back into orbit with her patented DJ Dan Double Strength Tractor Beam. And if that doesn't work, she uses powdered donuts.

There have been some videos posted on DJDan.am, such as Hanso Foundation Commercials.

There are ads for Jeep Compass (Homepage), sublymonal.com (Mythic Beastie Sighting), Verizon roadtrip (Podcast Archive), and Monster Job agent (Bios). It seems now that only the Sublymonal ad is working.

As part of Hansoexposed.com, three glyphs were found on DJ Dan's website, GMX18BCJ in the links section, 90VDHOHU in the merchandise section on one of the t-shirts and GZ2I in the eyes on the man section (hidden at the bottom).