This article is about the Other. For the U.S. Army member, see Cunningham (U.S. Army). For the character from Bad Twin, see Pru Cunningham. 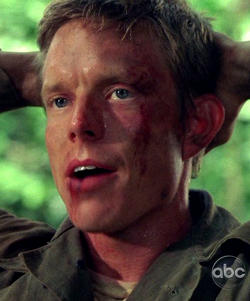 One of the Others that ambushed Sawyer and Juliet in the jungle following the flaming arrow attack on the remaining survivors wore a jumpsuit with the name Cunningham, which had belonged to a member of the U.S. Army. A young Charles Widmore, wearing a uniform labeled "Jones", appeared as the trio's leader, and Cunningham held Juliet while Mattingly was ordered by Widmore to cut off her hand. After Mattingly and Widmore were downed by rocks to the head, Sawyer tackled Cunningham and beat him with his fists. ("The Lie")

While Sawyer, Juliet, and Locke decided what to do with their prisoners, Cunningham attempted to converse with Widmore in secret via Latin, but Juliet understood them and revealed that all Others could speak Latin. She explained that the three soldiers were Others. When Juliet convinced Cunningham to tell them where his camp was, Widmore broke his neck. ("Jughead")

For fan theories about these unanswered questions, see: Cunningham/Theories

Retrieved from "https://lostpedia.fandom.com/wiki/Cunningham?oldid=1106504"
Community content is available under CC BY-NC-ND unless otherwise noted.