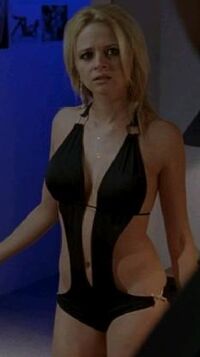 Crystal is a main character in the hit television series Exposé. Crystal is described as a sexy crimefighting girl, working under the tutelage of Mr. LaShade. She forms a team with Autumn and Corvette. ("Exposé")

Retrieved from "https://lostpedia.fandom.com/wiki/Crystal?oldid=1117346"
Community content is available under CC BY-NC-ND unless otherwise noted.