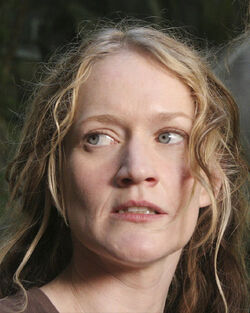 Colleen Pickett was an Other who appeared to have some level of authority. She was married to Danny Pickett. While attempting to take the castaways' sailboat, she was shot by Sun and died shortly afterward.

Colleen first appeared in the underwater section of the Hydra station, when she reported to Ben and Juliet that some of the castaways had a sailboat. Ordered to round up a team and take the boat, she left the aquarium to find some of the Others that could help her. Before recruiting Tom to her mission, she spoke to her husband Danny and told him about her mission, saying she was ordered to take the "Galaga." The two kissed, and Colleen left. ("The Glass Ballerina")

At night, Colleen and a group of Others managed to capture the sailboat, somehow unnoticed by Sayid and Jin, who were watching the boat from the Pala Ferry dock. Investigating below deck, Colleen was confronted by Sun, who held her at gunpoint. Colleen notably referred to Sun by her full Korean name and told her that she could not let her go, as it wasn't her call. She also said that they weren't the enemy, but that if Sun shot her they would become exactly that, and she knew that Sun was "not a killer." However, as the boat suddenly jerked due to the engine having been turned on, Sun panicked and shot an unarmed Colleen in the stomach. Shots were afterward returned by Tom and Ivan as Sun jumped off the boat, leaving a shocked and mortally wounded Colleen in the cabin. ("The Glass Ballerina")

When Colleen's team returned to the Hydra Island, Colleen was rushed, still alive, but in critical condition, to Juliet, Ben, and Danny. After she was brought to the Hydra operation room, Juliet did what she could to save her, but realized that while she was able to remove the bullet, she was unable to do more. Helpless, Juliet retrieved Jack, seeking his assistance. Jack arrived at the operating room and attempted to save Colleen's life. She flatlined on the table, and Jack was unable to revive her because the crash-cart was broken. Jack attempted to manually restart her heart, but failed. After her body was taken away, Jack stated that Colleen was dead before she was even brought to the room. ("Every Man for Himself")

The next day, Ben summoned Jack to attend Colleen's funeral, during which all of the mourners wore loose white clothes. Brenda Lee's "I Wonder" played on a speaker system while Colleen's body was released to the ocean on a funeral pyre, and was set on fire. ("The Cost of Living")

The heart-broken Danny took out his anger on Sawyer, holding him responsible. Right before attempting to kill Sawyer two days after the funeral, he said that his action was dedicated to his beloved dead wife. ("I Do")

Retrieved from "https://lostpedia.fandom.com/wiki/Colleen_Pickett?oldid=1117110"
Community content is available under CC BY-NC-ND unless otherwise noted.