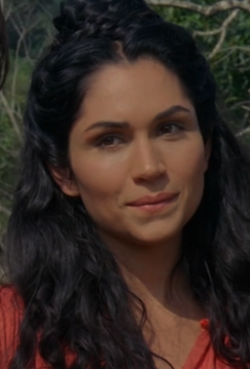 Claudia was the biological mother of Jacob and the Man in Black.

Approximately 2,000 years before the crash of Oceanic 815, Claudia was shipwrecked on the Island while pregnant. She awoke laying face down on the shore and managed to get up and walk inland. Clutching her stomach, she came across a stream and knelt down to take a drink. She was frightened by the reflection of a person and looked up to encounter a woman. The woman, who spoke in Latin, asked if she was hurt and needed help. Claudia hesitated a moment before thanking her and took the woman's hand. The woman took Claudia to the caves where the woman fed her and took care of her injuries. Still speaking in Latin, the woman asked her name. Claudia told her and drank from one of Mother's cups. The woman, now speaking in English (most likely a narrative device employed to minimize subtitle use), told Claudia that her name was beautiful. Claudia inquired where the rest of the woman's people were. The woman told Claudia that it was only her on the island. Claudia continued to ask questions, but the woman insisted that she rest instead as every question she asked would only lead to more questions. She refused to let Claudia search for other survivors, saying that if there were any, she would find them herself.

When Claudia went into labor, the woman helped deliver the baby, whom Claudia named Jacob.

As she was laying Jacob down, Claudia realized she was carrying twins and the second boy, the Man in Black was born. Claudia had only expected one child, so she did not have a second name planned. When Claudia asked to see the child, the woman apologized before striking her with a rock several times, and causing her death.

Claudia appeared to the Man in Black when he was thirteen years old, while he was playing Senet with Jacob. Jacob was unable to see her. The Man in Black excused himself and went after Claudia. She explained that Jacob could not see her because she is dead. She then showed him a village populated by passengers from the same ship she came on, informing him that he is also from across the sea. She told him that she is his real mother and was murdered by the other woman, whom the brothers called Mother. ("Across the Sea")

For fan theories about these unanswered questions, see: Claudia/Theories

Retrieved from "https://lostpedia.fandom.com/wiki/Claudia?oldid=1114030"
Community content is available under CC BY-NC-ND unless otherwise noted.