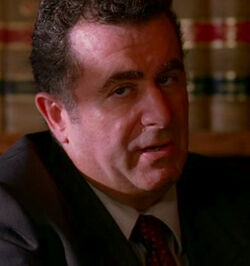 Clark Finney was Michael's attorney in "Adrift". His low fees were one of the primary reasons that Michael chose him to present his case regarding Walt's custody against Susan and Brian Porter. Finney was aware of his general status in this regard, and reminded Michael that their case against Susan's formidable legal team could be likened to a "David vs. Goliath", and would still be financially draining to Michael.

During the legal meeting, Finney was attempting to help Michael retain his rights as a parent to Walt. Michael became easily flustered, and Finney attempted to manage his outbursts. Eventually Susan made a deal directly with Michael, without any of the attorneys present.

Retrieved from "https://lostpedia.fandom.com/wiki/Clark_Finney?oldid=1095994"
Community content is available under CC BY-NC-ND unless otherwise noted.