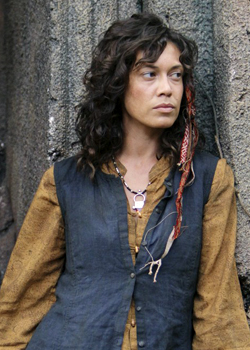 Cindy Chandler was an Oceanic Airlines flight attendant in 2004, when Oceanic Flight 815 broke up over a mysterious island in the Pacific. Surviving the crash in the tail section, she, along with her fellow survivors, made camp at the abandoned Arrow station for several weeks. When the group began to trek across the island to find the middle section survivors, Chandler was abducted by the island's natives and assimilated into their society. Living amongst these people, Chandler became the caretaker of her fellow abductees, the children, Zach and Emma. Stationed at the Temple after the time flashes, Chandler aligned with the Man in Black to insure the safety of the children. After the mysterious man's death, Chandler and the children joined the island's new protector, Hugo "Hurley" Reyes.

It appears Cindy was of Australian origin. Prior to the crash of Oceanic Flight 815, Cindy had a short conversation with Jack, asking him if he was okay and later giving him a second bottle of vodka after noticing his lukewarm response to the question. Minutes later, she noticed Charlie's odd behavior, and after she alerted her colleagues, a paranoid Charlie rushed to the toilets causing Cindy to give chase. However, her pursuit of Charlie was interrupted when the plane hit some minor turbulence and Cindy left to make the announcement for passengers to fasten their seat belts. She then resumed her pursuit of Charlie, knocking on the door to the bathroom. At some point, Cindy proceeded to the back of the plane. Cindy was in the tail end of the plane when it broke apart and crashed into the sea near the mysterious Island. ("Pilot, Part 1") ("Pilot, Part 2") ("Tabula Rasa")

After the crash, Cindy emerged from the water at the tail-section crash site and, like many others, tried to help the injured survivors around her. While trying herself to come to terms with the crash, Cindy was approached by Eko and asked to care for two young siblings, Emma and Zach, while Eko dealt with the bodies of the dead and Cindy developed a maternal relationship with the children, caring for them and looking out for them. That night a mysterious group of strangers invaded the camp and kidnapped three of the survivors. The group was startled and forced to decide if they should stay at the beach and await rescue at the risk of being targeted again, or they should move. When Nathan tried to get the group to stay on the beach to get rescued, Ana retorted that they didn't need a fire to get help because of the black box but Cindy revealed that they were off course when Oceanic Flight 815 crashed - and they wouldn't get rescued if they left the beach.

Twelve days after the crash, the Others returned and took more survivors including Zach and Emma. Afterwards, Ana found a list, making it clear that there was a mole among the group with blame falling onto Nathan. The group then started to trek along the Island, to avoid contact with the mysterious people. When suspicions became rife, Ana threw Nathan in the tiger pit and Cindy validated her beliefs by stating that she can't remember him from the plane and she is usually good with remembering the faces of her passengers. However, her claims would be proven wrong when it was revealed that Goodwin was the infiltrator.

One morning, Cindy went to the tiger pit and discovered that Nathan had escaped and immediately alerted the rest of the group (when in reality, Nathan had been killed by Goodwin). After they continued moving, the group came across The Arrow where Cindy and the rest of the group explored the structure and the radio. While trekking to higher ground to use the radio, Ana deduced that Goodwin was the real mole and killed him, returning to Cindy, Libby, Bernard and Eko telling them that they were now safe to set up a camp.

Some time later, Cindy and Libby trekked to the beach to catch some fish and Cindy noticed something on the shoreline - a body. On further inspection they discovered it to be an Asian man and the group quickly incarcerated him with the tail-section survivors believing him to be one of the Others, and Jin thinking the same of them. Jin eventually broke free, just as his fellow mid-section survivors Michael and Sawyer washed up on the beach, forcing Cindy to give chase. ("The Other 48 Days")

After Jin escaped he ran to the beach to find Sawyer and Michael, but Cindy and the rest of the survivors were close behind. Cindy watched on as Eko knocked the three unconscious. The Tailies dragged them through the jungle and imprisoned them in the tiger pit. Cindy and Bernard returned to The Arrow while Libby, Eko and Ana remained behind. Ana Lucia, however, soon discovered that the three were also Oceanic Flight 815 survivors and the tail-section survivors let them out of the pit. The group then trekked back to The Arrow where they met Cindy and Bernard and the tail-section survivors attempted to decide what to do next. ("Adrift")  ("Orientation")  ("Everybody Hates Hugo")

After Ana Lucia decided they should trek across the Island and join with their captives, Cindy dutifully followed. Before they began their journey, Michael tried to inquire as to what happened to make the tail-section survivors so on edge. This prompted Ana Lucia to order Cindy and Eko to scout the area to ensure the Others weren't in the vicinity. ("...And Found")

During the trek to the camp, the group stopped for a rest. After an hour, an anxious Cindy tried to persuade Ana to continue, worried that they would find them again. Much to Cindy's relief, their trek continued when Eko, Jin and Michael reunited with the group. Eko brought news that he had seen The Others. Despite the frightening news, the group was forced to go inland, something which they had tried to avoid to prevent contact with the Others, when the coastline became uncrossable because they were caring for an injured Sawyer who didn't have the strength to make such a difficult crossing across treacherous terrain. Despite Ana Lucia's complaints, Eko convinced the group to travel inland. During the trek, Sawyer grew weak from his gunshot wound and collapsed, and the group were forced to make an improvised stretcher for him. After approaching a steep hill, the group all had to work together to get Sawyer up, and Cindy was at the foot of the group. Upon reaching the top, however, Ana noticed that Cindy was missing, and as they climbed, she had seemingly and silently been taken by the Others. Ana initially wanted to find Cindy, but when the Whispers were heard, the group was forced to flee. ("Abandoned") ("The Other 48 Days")

About a month later, as Jack was being held in one of the animal cages at the Hydra, he woke up to see Cindy standing with a group of strangers looking at him. He recognized her from the plane and asked her how she had ended up with the Others. Cindy told him it was "not that simple," and Jack became angry. He asked her what she was doing there and she said she was there "to watch." Emma whispered in Cindy's ear and Cindy said Emma wanted to know how Ana Lucia was doing. Jack, remembering Ana Lucia's tragic death, shouted that if she had something to watch that she should go watch it. Abashed, Cindy led the group away from the cages. She later attended Juliet's trial. ("Stranger in a Strange Land")

Later, on the main Island, Cindy left the the Barracks with the rest of the Others. Locke helped her assemble her tent on their first night at the ruins and she thanked him. She told him not to mind the stares he was getting from some of the Others; they were just excited he was finally there with them, as they had been waiting for him for a long time. She later watched with Zach and Emma as Locke refused to kill his father, who was tied to a pillar amongst the ruins. ("The Brig")

Cindy was at the Temple with the group of Others being led by Dogen. She recognized Jack and his friends as being fellow plane crash survivors and told Dogen as much. When Dogen ordered the survivors to be shot, she did not seem flustered. After Sayid's apparent death, she, Zach, and Emma brought the survivors some food. She was also present for the rest of the events at the Temple. ("LA X, Part 2")

Cindy was present when Sayid came back to the Temple and delivered Locke's message, officially declaring Jacob dead and that there was no reason for them to stay at the temple any more. He told them that they had until sundown to decide on what to do. When Cindy asked Sayid what would happen at sundown if they stayed, he said that they would die. The message that Sayid sent to the Others seriously frightened most of them. Lennon tried to convince Cindy not to leave and that this was only a bluff. However, she realized that it was pointless to stay after Jacob's death, and she wouldn't risk staying. Cindy decided to leave the Temple with Zach and Emma and join the Man in Black. ("Sundown")

A few days later, Cindy left the clearing along with the rest of the Man in Black's recruits, heading towards the beach to make a rendezvous with Sawyer. When the Man in Black suddenly decided to leave the group, Cindy inquired as to what he was doing. He responded that he was going to find Sayid. Later, the Others were heavily bombed by Charles Widmore's team, killing many of them. ("The Last Recruit") Sayid later mentioned to Jack that some members of the Others survived, scattering into the jungle. ("The Candidate")

Cindy (along with Zach and Emma) survived the mortar attack launched by Widmore's team and continued living on the island under Hurley's reign. ("Lost Encyclopedia")

Aboard Oceanic Flight 815, Cindy was once again a flight attendant and asked Jack how his drink was, in an exchange mirroring their previous lives. Later, she helped as Jack resuscitated Charlie, and comforted him when Charlie expressed disdain at having been revived. ("LA X, Part 1")

Later in the Los Angeles International Airport, Cindy was seen walking with another female attendant of Flight 815, and they walked behind Claire, while she was talking with Desmond. ("Happily Ever After")

The Lost Experience and Bad Twin

Cindy was also featured in The Lost Experience, in which she was the unrequited love of Gary Troup, who dedicated his novel Bad Twin to "Cindy, my highest flying angel". He was reportedly "completely smitten" with her. In an interview, Troup commented that she was the girl who had changed his mind about marriage. Cindy was given a role in Troup's book, as main protagonist Paul Artisan speaks to a flight attendant named Cindy while on an Oceanic Airlines flight to Sydney.

This relationship does not appear to be canon, as it has never been mentioned in the show itself (Cindy, for example, has never tried to find out if he survived).

For fan theories about these unanswered questions, see: Cindy Chandler/Theories

Retrieved from "https://lostpedia.fandom.com/wiki/Cindy_Chandler?oldid=1117030"
Community content is available under CC BY-NC-ND unless otherwise noted.