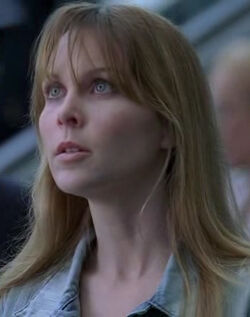 Charlotte Malkin supposedly drowned but came back to life while Dr. Ian McVay was performing an autopsy. McVay was told that she had spent two hours in the water. She was brought to him "dead". When he began the autopsy, however, it appeared she came back to life, as documented in an audio recording.

Her mother, Joyce Malkin, claimed that the resurrection was a miracle. According to her, Charlotte drowned in a river, and then woke up the next day. Richard Malkin, her father, claimed that his wife was lying to discredit him; Malkin worked as a psychic but admitted to being a fake.

Eko, tasked with investigating her mother's claims, went to see Charlotte, but her father refused to let the two speak to each other.

She stopped Eko at the airport to deliver a message to him from Yemi - she claimed to have seen Yemi while she was "between places", after the drowning incident. ("?")

Retrieved from "https://lostpedia.fandom.com/wiki/Charlotte_Malkin?oldid=1095613"
Community content is available under CC BY-NC-ND unless otherwise noted.