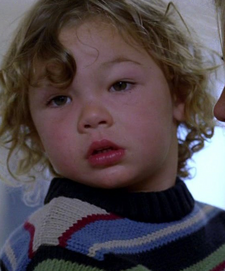 Charlie was the son of Desmond and Penelope Hume. He was named after Charlie Pace, whose actions helped his parents reunite. Charlie's parents actively hid from his grandfather, the coincidentally-named Charles Widmore, so the two never met. ("Happily Ever After")

Charlie was born in his parents' boat Our Mutual Friend, while they were near the Philippines, where the two of them were hiding after leaving the Island. When his mother, Penny went into labor, Desmond rushed to an island, where he found a doctor, who successfully delivered the baby.

Charlie accompanied his parents to their native Britain, where he and his mother fished in the Thames, but failed to catch anything. ("Jughead") A few days later, Benjamin Linus showed up with the intent of killing Penny on board Our Mutual Friend. Before Ben was able to shoot her, Charlie ran out calling for his mother, who ordered him to go back inside and stay there. His appearance softened Ben, who lowered his gun and was attacked by Desmond. ("Dead Is Dead") Afterwards, Charlie accompanied his mother to the hospital where his father was taken after Ben shot him. Charlie and Penny waited for Desmond until a nurse came and told Penny that she could visit her husband. Penny went to see Desmond, leaving Charlie in the waiting room. ("The Variable")

Retrieved from "https://lostpedia.fandom.com/wiki/Charlie_Hume?oldid=1113512"
Community content is available under CC BY-NC-ND unless otherwise noted.