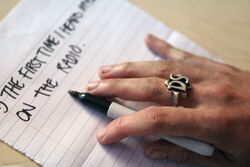 Charlie Pace wore a ring with the initials "D.S." on his right hand's middle finger. The ring, an heirloom of the Pace family, was owned by Liam Pace, Charlie Pace, and Aaron.

The ring, an heirloom of the Pace family, bore the initials of Dexter Stratton, the paternal grandfather of Megan Pace. The ring traveled down through the generations, eventually belonging to Liam. ("The Greater Good") Liam and his brother Charlie named their band, Drive Shaft, after the initials on the ring.

One Christmas morning in Helsinki, during Drive Shaft's second tour of Finland, Liam, concerned that he would die early and not have an heir to pass the ring along to, gave the ring to Charlie, who he deemed more likely to begin a family. ("Greatest Hits")

Charlie wore the ring while traveling on Oceanic Flight 815, at one point tapping it nervously on the armrest of his plane seat while waiting to get a fix of heroin. ("Pilot, Part 2")

Charlie wore the ring for the 91 days he survived on the island. However, before leaving for his fatal mission to the Looking Glass, Charlie left the ring in Aaron Littleton's crib, passing the ring on to the infant, who in their short time together on the Island had become something of an adopted son to Charlie. ("Greatest Hits")

However, Aaron never received the ring, as he never returned to his crib before leaving the Island as one of the Oceanic Six. ("There's No Place Like Home, Part 2") The ring remained in Aaron's crib during the time flashes.

When encountering the camp in 2007, on the way to see Jacob, Sun found the abandoned crib and the ring within it. ("The Incident, Part 1") It is unknown whether Sun gave the ring to Claire sometime after finding it, or if it remained in her possession upon her death. ("The Candidate")

Retrieved from "https://lostpedia.fandom.com/wiki/Charlie%27s_ring?oldid=1117105"
Community content is available under CC BY-NC-ND unless otherwise noted.