Hand messages have been used on several events by Charlie to communicate when otherwise unable. This has usually been done by writing on his hand with a marker, and pressing it against a glass window separating himself from the receiver of the message.

In the communications room of The Looking Glass station, Charlie was able to establish a connection with Penelope Widmore, during which he discovered that the boat waiting offshore did not belong to Penny, contrary to what Naomi had told the survivors. However, as soon as he found this information out, Mikhail, who had previously been thought dead, appeared with a live grenade in his hand, blowing out the porthole to the room, letting water flood in. Charlie, realizing his last chance, pulled out a marker and struggled to write on his hand as the water rose. He was able to complete his message, "Not Penny's Boat", and press it against the window so Desmond could see, before Charlie swam back and drowned. ("Through the Looking Glass")

Charlie later appears to Hurley after the rescue of the Oceanic 6 in a vision. In this vision, he is swimming toward a glass window, on the other side of which is Hurley. As he reaches it, he places his hand against the glass, with "They need you" scrawled on it in a similar fashion to "Not Penny's Boat." The glass then shatters, and in Hurley's vision, the water began to flood in. ("The Beginning of the End") 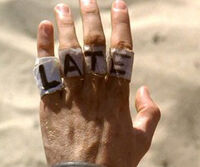