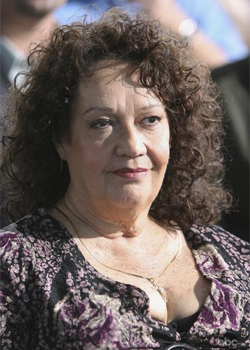 Carmen Reyes was Hurley's mother. She was a devout Catholic, and was fluent in Spanish. She was often overbearing towards Hurley. Carmen had at least one other son, Diego Reyes.

Her husband, David Reyes left the family about 17 years before Hurley came to the Island. ("Tricia Tanaka Is Dead")

When Hurley became reclusive and practically catatonic after the deck accident, she had him committed to the Santa Rosa Mental Health Institute. He later moved back in with her after his condition improved. She is the heir to Hurley's millions, although she doesn't know this. ("Numbers") ("Dave")

When Hugo won the lottery using the Numbers, she was affected by his bad luck as well. Her father-in-law Tito died of a heart attack during a press conference; her other son, Diego, moved back in after his wife Lisa (whom Carmen refers to as "that whore") eloped with a waitress; and she broke her ankle while getting out of the car to see the new house Hugo had bought her with his winnings. The house subsequently caught fire. ("Numbers")  ("Everybody Hates Hugo")

She later shared a mansion with Hugo in Los Angeles. Worried that Hugo was obsessed with the idea of being cursed, she called her estranged husband -- he moved back in and they became intimate again, to Hugo's disgust. ("Tricia Tanaka Is Dead")

When Hurley returned from the Island she was still in a relationship with her husband, and both met Hurley at a private military base just west of Honolulu, Hawaii, along with other family members of some of the Oceanic Six. A short time later she threw Hurley a surprise birthday party in the theme of a tropical island. She told Hurley "Jesus Christ is not a weapon," after he misunderstood the party as someone breaking into the mansion, and prepared himself to use one of Carmen's many religious figurines. ("There's No Place Like Home, Part 1")

She was out shopping when Hurley initially returned after breaking out of the Santa Rosa Mental Health Institute. When she returned, she was surprised to see "a dead Pakistani" on her couch. Later, she questioned Hugo about why he was on the news. Hurley confesseed all the events on the Island to her. She told him that she believed him as he broke down in tears. ("The Lie")

In the flash sideways, Mrs. Reyes attended a banquet at the Golden State Natural History Museum honoring her son Hugo as Man of the Year. After the banquet, she expressed some frustration that Hugo had not found a girlfriend, and told him that she had set him up on a blind date with his grandfather Tito's neighbor's daughter Rosalita. ("Everybody Loves Hugo")

Retrieved from "https://lostpedia.fandom.com/wiki/Carmen_Reyes?oldid=1115191"
Community content is available under CC BY-NC-ND unless otherwise noted.