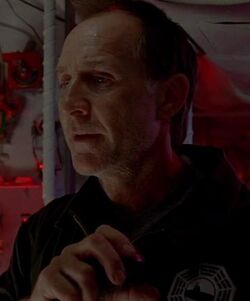 Captain Bird was a member of the DHARMA Initiative, and captain of the Galaga. ("Follow the Leader")

On their way off the island, Sawyer, Kate, and Juliet persuaded him to surface the sub in order for them to leave it. When he asked what to say to Horace if he called, Sawyer shot the radio. The Captain then provided them with a zodiac raft and surfaced. He then proceeded on course to Ann Arbor. ("The Incident, Part 1")

Retrieved from "https://lostpedia.fandom.com/wiki/Captain_Bird?oldid=1113671"
Community content is available under CC BY-NC-ND unless otherwise noted.