Cameos are brief appearances by well-known or otherwise significant people in the episodes of Lost, in cases where their fame, significance, or accessibility was a primary factor in being selected to appear. The people are not necessarily actors, and the parts are usually uncredited nonspeaking parts. It is not considered a cameo appearance when actors known for other works are hired for parts in Lost. Most identified cameo appearances in Lost have been by members of the crew.

Cameos on the show 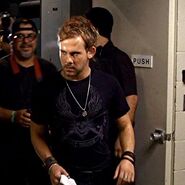 Although not strictly a cameo, several notable appearances have been revealed in ABC' promotional still photography:

Ms. Honolulu as seen in "The Cost of Living"

Ms. Honolulu appears in a promotional still for "The Man from Tallahassee"
Community content is available under CC BY-NC-ND unless otherwise noted.
Advertisement