"Cabin Fever" is the eleventh episode of Season 4 of Lost, and originally aired on May 8, 2008. Locke, Hurley, and Ben trek through the jungle in search of Jacob's cabin and answers, while tensions run high aboard the Kahana as Keamy prepares to return to the island.

A record playing "Everyday" by Buddy Holly is started up as a girl dances around her room. She is putting lipstick on in the mirror when her mother walks in. They talk about the fact that the girl is going out for the night. Her mother asks if she is going out with "him" and mentions that he is twice her age and she doesn't approve. The girl, identified as Emily, says that she is in love with the man. Emily runs out into the rain trying to escape her mother and meet the mysterious "him" when she runs out into the road and is hit by a car.

Emily wakes up in the hospital being rushed through a hall on a gurney. She tells a nurse that she is almost six months pregnant.

After giving birth to her child, the nurse tells her that it is a boy and rushes him away saying that he is too young to be held. Before being wheeled out, Emily tells the nurse to name him John.

Later, Emily and her mother are standing over an incubator with John inside. The nurse enters and seems overjoyed at the fact that John is the youngest premature baby to survive at the hospital. He suffered from infections and pneumonia among other things, but successfully fought them off. Emily's mother, Mrs. Locke, seems less than thrilled at this information. At mention of taking John out and having Emily hold him, Emily becomes upset by the idea. She runs out of the room crying, saying that she cannot do it. Mrs. Locke is left in the room with the nurse and unemotionally asks who she should speak to about adoption. Before getting an answer, she sees a man standing behind the viewing window. Mrs. Locke looks disturbed to see him there. The nurse asks if he is the father of the baby, and she responds by saying that she doesn't know who he is. The man's face is shown to reveal that it is Richard Alpert.

A young John is playing backgammon in a living room when his foster sister Melissa knocks the pieces off the board. His foster mother scolds her before telling John that there is a man there to see him and that he should be on his best behavior. Richard Alpert walks in the house and sits down at the table across from him. He introduces himself as Richard and tells John that he runs a school for special children and has reason to believe that he is one of them. Richard asks John if he minds if he shows him a couple of neat things and John shakes his head. Richard sees a drawing on the wall of the room of a man lying on the ground while a mass of black springs from the ground and hangs over him, resembling an attack by the smoke monster. When asked if he drew the picture, John nods his head. The two walk to another table and sit down. Richard tells John that he wants him to look at a few objects, think about them, and tell him which of them are his. He lays out on the table a baseball mitt, a book entitled "Book of Laws" written in a Hebrew-type font, a small container of granules, a compass, a comic book entitled "Mystery Tales", and a knife. John inspects the container of the granules and the compass. John starts towards the "Book of Laws", at which point Richard looks hopeful, but finally he picks up the knife, instead. Richard seems disappointed and angry. He asks John if he is sure, and after he nods, Richard snatches the knife, and the other items on the table, away. He puts these back into his bag and stands up quickly. The foster mothers enters the room and asks how John did. Richard responds that John is not quite ready for his school and walks out of the house. The woman scolds John asking what he did and he looks down dejectedly.

Teenage Locke, now a high school student, bangs on the door from the inside of a locker calling to be let out. A teacher opens the door and John finds everyone laughing when he exits. The teacher suggests that he come to the nurse's office with him because his lip is bleeding. Soon after, the two sit in an office where John says that he does not want to talk about what just happened despite the man's prodding. The teacher tells John that he got a call from Portland on behalf of Mittelos Laboratories who work with chemistry and new technologies. When he mentions speaking with a Dr. Alpert John looks up. The teacher tells him that Mittelos is looking for young, bright minds and they want John to go to their summer camp. When Locke asks how they knew about him, the teacher suggests that they sent a representative to a science fair where John had presented a model of an island. John gets upset and tells the teacher that he is not a scientist, but the type of person who is interested in sports and cars. The teacher kindly tells him that even if he wants to be more like the popular boys at school, it is just not who he is. He says that John simply can't be a super-hero, to which he responds, "Don't tell me what I can't do!" He hands him back the pamphlet and walks out.

Adult Locke struggles to walk while undergoing physical therapy at a rehabilitative center. The trainer gives praise to Locke's good work and tells him enough for the day, waving an orderly to bring over a wheelchair. The orderly helps Locke into the chair and pushes him towards the elevator, talking with him and being revealed as Matthew Abaddon. He tells John that surviving an 8-story fall was a miracle and suggests John take an Australian walkabout and learn who he truly is. Abaddon tells Locke that he's "much more than an orderly", and again urges him to go on the walkabout, saying purposefully that when they met again Locke would "owe him one".

Hurley, Locke and Ben make camp in the jungle overnight. The next morning, Locke awakens to the sound of an axe. He follows the sound and finds a man in a DHARMA jumpsuit cutting down trees. Locke asks him who he is, and he informally answers that his name is Horace and that he is building a getaway for his wife, and that he needs a break from the DHARMA Initiative. Seeing the confused look on Locke's face, Horace asks if he makes sense, to which Locke replies that he does not. Smiling, Horace turns to Locke, bleeding from his nose, and replies that it is probably because he's been dead for twelve years. John is told that he needs to find Horace in order to find Jacob. Strangely, Horace begins cutting down the same tree he just toppled, which has replaced itself. Horace repeats several previous sentences, and cuts down the tree for a third time. John then awakens, revealing that he was simply dreaming, to find Ben awake and looking at him.

Locke leads Hurley to the Mass Grave, revealing that Ben killed off approximately 100 people of the DHARMA Initiative, to which Ben makes no comment. Locke rummages through the bodies, reading the names on the jumpsuits until he finds Horace's decaying body. He opens the pocket on the jumpsuit and finds blueprints to a cabin and a map to it. Locke offers Hurley a chance to return to the beach, though it would be at night and alone. Instead, Hurley remains with them and Ben commends Locke's ability to force Hurley's choice.

Though Ben is doubtful of their ability to locate the cabin, Hurley finds it. Locke lights a lamp and enters alone, leaving Ben and Hurley to wait outside. Inside Locke sees the shadowy figure of Christian Shepherd seated in the corner, who introduces himself as Christian and says he speaks for Jacob. Christian reaffirms Locke's notion that he found the cabin because he was "chosen" , and tells Locke not to worry about Claire, who is found to be reclining in a chair in a corner of the cabin without Aaron but nevertheless appearing relaxed and nonchalant. Christian says that the people from the freighter are returning and tells Locke to ask the one question that really matters. Locke asks how he can save the island.

Hurley and Ben split an Apollo bar outside before Locke emerges from the cabin. Ben asks if he knows what they're supposed to do next, and Locke replies: "We're supposed to move the island."

Keamy and his team arrive on the Freighter. Desmond notices that their wounds are not caused by gunshots and wonders what has happened. Sayid is sure they won't let it happen again, the next time they go back. Captain Gault walks to them and Omar, who stands guard, that Keamy wants him in the armory. Omar says he isn't supposed to let them out of his sight, to which the captain replies that "he'll watch them". Omar leaves, while grabbing his phone. The captain then tells Desmond and Sayid to hide in a pantry under the gully. Sayid asks if Michael is dead, to which the captain answers no - and that is exactly the reason they have to hide. Doc Ray can be seen in the background. Sayid asks for the ship's "Zodiac raft", saying the only way to save their lives is to get their people off the island and on to the boat.

Michael is lying on the floor of a room on the freighter with a bloody lip. Frank helps him up, asking why Michael hadn't told him he was a survivor of Flight 815, citing the fact that he was one of the few people who would have believed him. Michael tells Frank it was because his boss had staged the wreckage, which even Frank thinks is a conspiracy. He begs Frank not to bring Keamy back to the island, saying "He's going to kill everyone...everyone".

Back at the beach camp, Jack is searching and indulging in food in the kitchen when Juliet appears and scolds Jack for being out and walking around so soon after his surgery. Jack smiles and flirts stating he is hungry. Juliet flirts back exclaiming that doctors are always the hardest patients. As the two share a moment, the noise of a helicopter is heard. The entire camp runs to the shore to watch the Freighter's chopper pass directly overhead. As they watch stunned and shocked, a package is dropped from the chopper as it flies above. Jack runs over, opens the bundle and finds a new Satelittle phone, it appears to be tracking the helicopter. Jack states, "I think they want us to follow them." 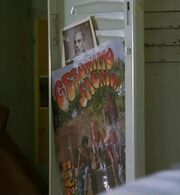 The single of "Everyday" by Buddy Holly was released in July of 1957, over one year after Locke's birthdate of May 30, 1956. It would be impossible for Emily to have been playing this record the night of John's birth. (source: [1])

For fan theories about these unanswered questions, see: Cabin Fever/Theories

Retrieved from "https://lostpedia.fandom.com/wiki/Cabin_Fever?oldid=423973"
Community content is available under CC BY-NC-ND unless otherwise noted.