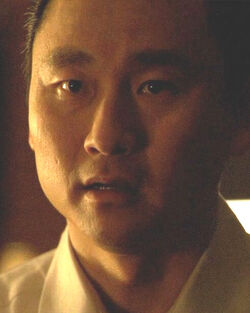 Byung-Cheol Han (Korean: 한병철) was the Secretary for Environmental Safety visited by Jin twice to deliver a "message" on behalf of his boss, Mr. Paik. The message was that Mr. Paik was "very displeased."

He gave Jin his daughter's dog, Bpo Bpo which Jin later gave to Sun. It was in his house that Hurley was visible on the television in the background, in a Korean news story. Han was later beaten by Jin to prevent a worse fate at the hands of another of Mr. Paik's henchmen. His wife, Mrs. Han, was present during the encounter, as was his daughter. ("...In Translation")

Retrieved from "https://lostpedia.fandom.com/wiki/Byung_Han?oldid=1095634"
Community content is available under CC BY-NC-ND unless otherwise noted.