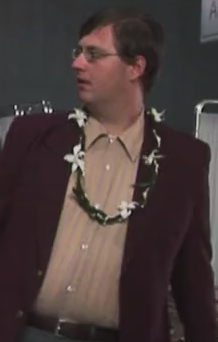 Buzz was a DHARMA Initiative member who came to the Island in 1973 and was killed in the Purge.

Buzz was a new DHARMA recruit, and he came to the Island along with Ben and Roger by the Galaga. He was then welcomed by Casey, June and Mike at the pier. Afterward, he went to the Processing Center along with the other new recruits and registered.  ("The Man Behind the Curtain")

Years later, Buzz was seen sweeping the walkways at the Barracks as grown up Ben walked past him.

Later that same day, Buzz was watering the grass when the purge commenced, and he inhaled poisonous gas released from The Tempest. As a result, Buzz, along with other DHARMA members at the barracks, was killed. Buzz was last seen deceased on the ground, still holding the hose even after his death.  ("The Man Behind the Curtain")  (Lost: The Complete Third Season (DVD))

Retrieved from "https://lostpedia.fandom.com/wiki/Buzz?oldid=1115951"
Community content is available under CC BY-NC-ND unless otherwise noted.