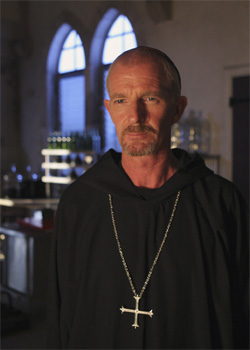 Brother Campbell is the leader of the Eddington Monastery in Scotland. Campbell offered work for a distraught Desmond (who briefly attended this monastery in "Catch-22"). However, one night Campbell discovered Desmond drunk on wine the monastery makes. As a result, he fired him. He gave Desmond one last job -- to load wine into Penny's car, introducing them to each other.

Campbell's desk has a framed photograph of himself with Daniel Faraday's mother, Eloise Hawking outside the monastery.

In the lighthouse, a "Campbell" was listed as candidate # 129. ("Lighthouse") However, Brother Campbell addresses Desmond as "Brother Desmond." This suggests that Brother Campbell's first name, and not last, is Campbell. Also, there is no indication he has ever been to the Island, unlike all the other "known" candidates. As such, it is likely the candidate is not this Campbell.

Retrieved from "https://lostpedia.fandom.com/wiki/Brother_Campbell?oldid=1095617"
Community content is available under CC BY-NC-ND unless otherwise noted.