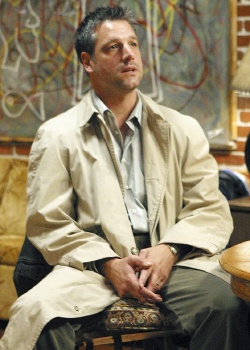 Brian Porter was Susan's boss, who was living and working as an attorney in Amsterdam in the Netherlands. Brian married Susan after her relationship with Michael ended. He and Susan attempted to adopt Walt (eventually successfully), which resulted in a legal struggle with Michael who was unwilling to give up his parental rights.

Brian surrendered custody of Walt to Michael after Susan died. He claimed that "things happen" when Walt is around and that Walt is "different somehow." He arranged for Walt and Michael to be on Flight 815. Michael also claimed that Brian allowed Walt to keep Vincent, though he was likely lying.

Retrieved from "https://lostpedia.fandom.com/wiki/Brian_Porter?oldid=1038868"
Community content is available under CC BY-NC-ND unless otherwise noted.