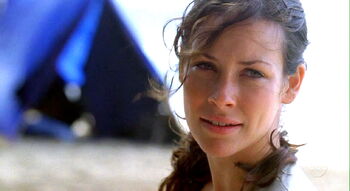 "Born to Run" is the twenty-second episode of Season 1 of Lost and the twenty-second produced hour of the series as a whole. With news that the raft must leave at once to avoid changing winds, Kate decides that she needs to be one of the passengers and attempts to steal Sawyer's spot. Meanwhile, suspicion abounds after Michael's drinking water is tampered with. Flashbacks in this episode focus on Kate reuniting with Tom after she learns about her mother's cancer.

A young blond-haired woman pulls up at a motel. The license plate on her vehicle says Nebraska, but the woman quickly changes it to an Ohio plate from an assortment stashed in the trunk of the car. Grabbing a towel and shampoo from the maid’s cart, the woman enters a room that has just been made vacant, adding a "Do Not Disturb" sign. She puts dark hair dye on her blond hair. As she showers, she is revealed to be none other than Kate, as the excess brown hair dye runs off her hair in the water. At the hotel's office, she picks up a letter under the name of "Joan Hart." As Kate reads the hand-written note in the car, she begins to sob uncontrollably. ♪

At a hospital, Kate walks down the hall carrying a large bouquet of flowers. She poses as a delivery girl, asking to see Diane Janssen. On her way to the room, she sees a sheriff and uses the flowers to cover her face. ♪ Kate leaves the hospital without giving the flowers to the patient she wanted to see. In the hospital parking lot, Tom Brennan gets into his car, only to be surprised by Kate who was hiding in the back. She tells him that Diane is dying of cancer, and she needs his help.

At Tom’s house, Kate looks at the family photos on the refrigerator as Tom speaks to someone on the phone about needing to book the MRI scanner. After finishing his phone call, Tom talks about his son and wife, and Kate seems upset that Tom is with someone. He promises Diane will get a scan in the next few hours, so they have a little time to kill until then. In the moments that follow, Kate comments about whether "it's still there." Though Tom is reluctant, Kate says they may never have this opportunity again. The pair drive out to a bare cattle field, with a huge tree engulfing the landscape. ♪ Here, they count steps from the tree and begin to dig.

Some time later, Tom offers Kate a beer as they continue their dig, before they manage to hit metal. ♪ Kate pulls out a box, and inside is a time capsule with a number of childhood objects, including a red baseball cap, a baseball, and Tom’s favorite toy airplane. They also find a tape recording, which they play in the car. Recorded in 1989, young Tom and Kate comment on how they will be married when they find the capsule in the future, and also about running away together. During this, young Kate additionally mentions that Tom "knows why" she always wants to run. The tape is stopped, and the two kiss. Pulling away, Kate apologizes as Tom says they’d better get to the hospital. ♪

At the ward, it becomes apparent that Kate just wanted a moment to see Diane in private before her surgery, and she needed Tom’s help to do this. With that final time alone together, Kate is reunited with her mother and apologizes for everything she has put her through. Instead of a warm greeting, however, Dianne screams for someone to help her. ♪ Kate runs from the room, but is grabbed by a security guard, whom she escapes from by hitting him with his own walkie. Tom finds her, and the two head for his car. The police have already created a barricade to prevent her escaping. She shouts for Tom to get out of the car, but when he refuses, she drives straight through, clipping the police car and drawing heavy fire from the sheriff. Though they manage to escape, it is not without cost, as Kate realizes that one of the sheriff’s bullets has hit and killed Tom. With little time, Kate is forced to run from the car, leaving both Tom and the toy airplane behind.

Out by the sea, Kate plays with Tom Brennan’s toy airplane. Her train of thought is interrupted by Charlie, who talks about Drive Shaft and how the raft will save them all, meaning he can make millions on his comeback gigs. As they watch some of the survivors working on the raft, they witness an argument sparked by another survivor, Dr. Arzt.

Arzt tells the group monsoon season is coming, meaning winds will change southwards towards Antarctica. As the raft needs to head north to reach shipping lanes for a chance of rescue, he says the raft must leave immediately to avoid nature turning against them. The news hits everyone hard, especially Kate, who chases after Michael. She wants a place on the raft, contesting Sawyer’s spot, and tries to present herself as a better candidate. Michael won’t allow it. He says that the raft is full and Sawyer bought his passage fairly by giving crucial supplies for the first raft’s construction.

Meanwhile, Sayid leads Jack into the jungle, and with Locke, they let him in on their secret. The Hatch has now been partially dug up, and the three decide they need to discuss what to do next. ♪

Sawyer begins to complain about some of the organization and planning going into the raft, irritating Michael. He says maybe Sawyer isn’t the right man to come with them, considering he knows virtually nothing about sailing or survival at sea.

Further down the beach, Kate is burning the picture off Joanna's passport so that she can use it should the raft be successful and the group is rescued. Sawyer arrives, having ascertained from Michael that she was after his place on the raft. He tells Kate he knows she was the Marshal’s prisoner on the plane and she will be captured if rescue arrives, but her secret is safe with him and she will not take his spot. He starts to leave, but as he goes Kate says if she wants his spot, she’ll get it.

Walt passes Michael some water as they work on the raft. They talk about what they’ll do when they get rescued. Suddenly, Michael stumbles, collapsing and ordering Walt to get Jack. Walt finds Kate and Sun, and Kate takes up the pursuit to find him. At the Hatch exterior, Jack, Locke, and Sayid discuss opening it. Sayid cautions against opening it, says there is no handle on the Hatch door, so perhaps it was never meant to be opened from the outside. As the group heads back, Kate catches up to them and tells Jack about Michael's collapse. After examining him, Jack concludes there was something in his water and finds residue of a substance in his drinking bottle, suggesting foul play.

Later, when Jack checks up on Michael, he inadvertently reveals the truth to him. A livid Michael immediately suspects Sawyer. However, Hurley also accidentally reveals to Locke that Kate was the fugitive, causing Locke and Jack to argue again about keeping secrets from each other on the Island.

Meanwhile, Charlie plays his guitar to Claire's baby as Claire cuts his hair. ♪♪ He offers Claire a place to stay in Los Angeles when they get rescued. At the caves, Kate inquires after Michael, and asks whether his place on the raft is now open. Jack accuses her of poisoning him, and in disgust Kate leaves. At the other end of the caves, Walt finds Locke changing the bandages on his leg. He wants Locke to know he didn’t poison his father. When Locke grabs Walt's arm, Walt suddenly stops, telling John to not "open that thing," much to Locke’s confusion.

At the beach, Michael blankly tells Sawyer that he’s off the raft, accusing Sawyer of poisoning him. In retaliation, Sawyer openly reveals to the entire group that Kate was the fugitive on the plane. He says Kate only cares about herself and would go to any length to escape. Kate admits that she was the criminal, but denies poisoning Michael. He won’t listen, however, reinstating Sawyer as the fourth passenger. Everyone moves out, leaving Kate alone with her toy airplane. ♪

Later, the raft is hurriedly being put together to set sail as soon as possible, and Jack approaches Sun. He tells her that he knows she is behind the poisoning, and she had intended to poison Jin rather than Michael. Sun admits everything; she did not want Jin to die at sea and just wanted to make him temporarily ill so he would not go. Jack says her secret is safe, but needs to say goodbye, as Jin will be going. ♪

As night falls, Sawyer finds Kate, telling her he’s back on the raft and will set sail tomorrow. He says he only did what he had to do in revealing the truth because he couldn’t afford to lose his place. Kate asks why he needs to be on the raft so badly, and Sawyer replies that there is nothing on the Island worth staying for. Kate drops her hard exterior for a moment, and tells Sawyer to "be safe" as he leaves.

Walt and Michael sit by the raft. Walt reveals that he destroyed the first raft. He says he didn’t want to leave the Island at first, but Michael isn’t too mad. He says they can stay on the Island if Walt wants, but his son says they "need to go." Meanwhile, Sun finds Kate, telling her Jack knows, but not about Kate's part--the poisoning was Kate’s idea all along. Sun says Kate was only trying to help her, but the look on Kate’s face suggests another agenda. Sun says that she always thought as a child that meeting the man she loved would make her life happy forever. As Kate stares out into the dark, she adds "Yeah, me too."

The opening cue introduces Kate's theme and appears on the Season 1 soundtrack as "Kate's Motel". The song Charlie composes on the guitar uses the series's main theme.

For fan theories about these unanswered questions, see: Born to Run/Theories

Retrieved from "https://lostpedia.fandom.com/wiki/Born_to_Run?oldid=1093525"
Community content is available under CC BY-NC-ND unless otherwise noted.